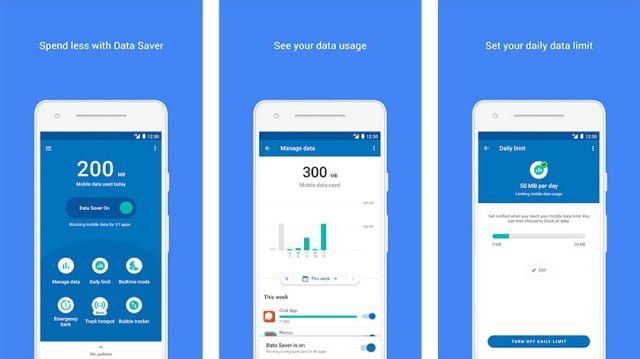 So we have gathered information on what we might see as potentially the best applications for data saving, available on the Google play store.

So thw DataEye is a reasonably decent enough data saver application for Android users. To define the function of the application in one sentence, well it is basically a solution with a ton of options. The application shows you your data usage in pretty much real-time and also tells you how much each app uses data. You can in turn off the data for the apps that you do not use that frequently or applications from which you do not require syncing in the background at all times. The application is very easy to access and to use and usually works perfectly for the users. All in all the in terms or the Google Play reviewers, they either love it or hate it, there is no definitive line in between.

The second application that we may think is a very good data saving application would be Datally, this is Google’s version of data saving application, moreover the app shows you the data consumption overall or on a per-app basis. Other than that, it also allows users to block background data and to also restrict data limits to help keep your data usage in check. It also comes packed with many good features like a bedtime feature that automatically blocks the background data on you’re device during the hours that you are sleeping. It also uses a VPN for the purpose of blocking the data usage as well and that helps in bypassing a lot of issues. The application has got some really good reviews and overall the application works really well.

Must Read: Google is rolling out the three-column Favorites UI for its phone

This is once again a data monitoring application and one of the best up to date applications available on the play store. It also works really well as a security application and monitors your data consumption on per-app basis. It also blocks apps from network access if they get a little too frisky with your data. The UI is thought to be really useful and clean, in all honesty there is almost nothing wrong with the app, it does what it says in the description to full effectiveness and also helps in identifying the heavy applications that may require blocking or un-installing. There is also a premium version of the application which has more features in it, but you have to purchase it, but we think the free version of the app is pretty amazing too.

So web browsing is still one of the most common ways of accessing the Internet and so many browsers have built in data saving features available on them. Examples could include, Google Chrome, UC browser, Opera Mini and the Pheonix browser. The result in turn is that they can help compress data, lower the data of the resolution of images and sometimes even omit parts of the website altogether which as a result helps in lowering the overall data usage.

Well the Android Go is a boon for data savers all around the globe. It released many Lite and Go applications for users which are in turn, lighter, smaller, and well consume less data altogether. Some amazing options include Facebook Lite, Spotify Lite(available depending on your region) , Facebook Messenger Lite app and the Youtube Go(also available in some regions). Moreover in addition to these apps running quickly and more efficiently, these apps also tend to consume less data then their full version counterparts. These applications are all available to be downloaded for free.

So a new leak suggests that the Samsung Galaxy Note 10...