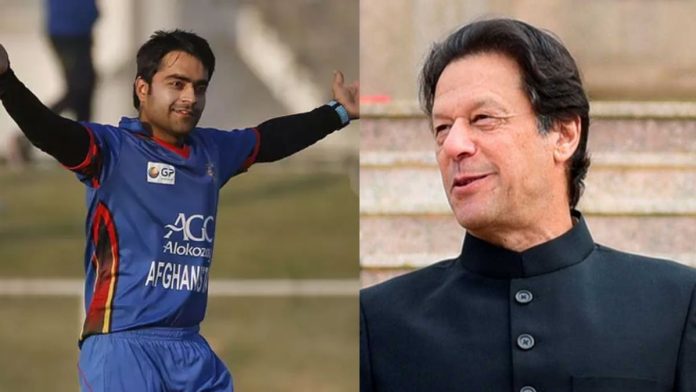 A cricketer popular all around the world for his amazing leg spin bowling, Rashid Khan took to twitter to announce how  “pleased” he was to meet with the Prime Minister of Pakistan, Imran Khan. The Prime Minister met with the Afghanistan cricket team, alongside President Ashraf Ghani, while he was on his maiden visit to the city of Kabul, Afghanistan. The Afghan player expressed his fulfillment on Twitter expressing his feelings after meeting the Pakistani premier. He wrote, “Pleased to see respected PM Imran Khan together with my President Ashraf Ghani and meeting my team,”.

Rashid Khan also mentioned how he strongly believes in the power of sport to inspire and unite people together while adding that sports is something that “creates hope, unity, love and peace.” He further mentioned that “Wish one day our national teams can host each other at home and play cricket,” In addition, the Afghanistan cricket team also presented a bat which was signed by all of the team to PM Khan.

Must Read: Peace Talks Continue Between Pakistan And Afghanistan

While on visit, the prime minister said that Pakistan would do all in its power to end the spread of violence and establish peace within Afghanistan, as he held a press conference alongside Afghan President, Ashraf Ghani. Khan mentioned that, “The people and government of Pakistan have only one concern, and that is to establish peace in Afghanistan because the people of the country have suffered for four decades.”

He also believes that even though Pakistan played its role in establishing communication between the Taliban and the US, as well as engaging them in the intra-Afghan dialogue, the level of violence still seems to rise within the country, something that needs to be addressed by both parties. PM Imran Khan also assured the Afghanistan government that Pakistan is all in to help the country to come out of such hard times and create easier times for them.  “We will be helping you more than your expectations,” Khan mentioned.

realme Gaming Championship – Narzo Edition Comes to an End Setting Fire within the...

NetMag Staff - April 13, 2021
0
The realme gaming championship was held in partnership with Free Fire and the winners walked away with Narzo 30A and cash prizes