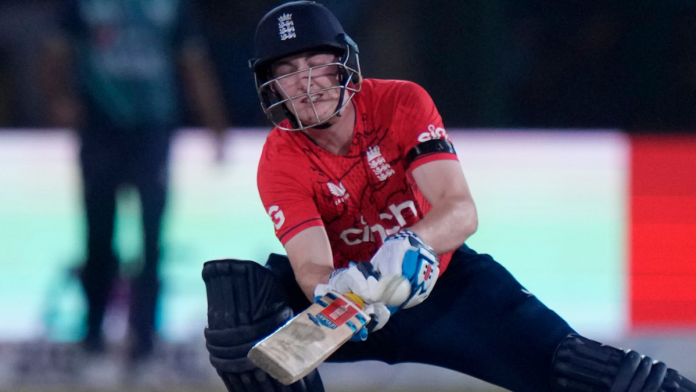 As they were chasing 160 in their first encounter at the ICC in Pakistan since 2005 the English’s Alex Hales made his first mistake.

The exuberant opener, who was playing his first international cricket match in three years of playing, hit a sloppy ball of Pakistan spinner Usman Qadir straight into the hands of Shan Masood at mid-wicket but was given a quick reprieve when the debutant spit it out.

England lost Ben Duckett two balls later but the newly arrived Harry Brook carried his team to victory with just four balls and six wickets remaining in the opening of the seven Twenty20 internationals in the National Stadium on Tuesday.

The right-hander, who was crowned the Pakistan Super League with Lahore Qalandars in the summer of this year, was unbeaten with 42 off 25 scoring seven fours in his rout.

With the added benefit of having Hales on the other side, Brook ensured England kept the rate of play in check and unleashed his match-winning attack by hitting straight of the Usman complete toss on the 13th.

After negotiating the slow left-armed Mohammad Nawaz with care in the next over Brook took out the pacer Shahnawaz Dahani for two fours before Hales rejoiced in his triumph by pounding the right-armer into the ground to set up a new boundary.

Brook didn’t show any respect for Pakistan speed spearhead Naseem Shah either as he created three boundary boundaries with his right arm the next over.

Speedy bowler Haris Rauf was able to score Hales at the end of the 17th over, however, it wasn’t enough for Pakistan and England having just 16 to go from 18. A goal by England’s substitute skipper Moeen Ali, and two more scored by Brook helped get England across the line.

Hales was able to score 53 off 40, established the foundation to England prior to the game.

The right-hander who is a part of Islamabad United in the PSL has given the hosts an edge in the powerplay despite losing his fellow player Phil Salt to Dahani in the third over, due to an impressive fielding effort on the square leg from Haider Ali.

Hales formed short teams between 34 off together with Dawid Malan, and Duckett respectively, before the pair was dismantled by Usman to let Brook to enter the middle.

As opposed to England however, the best portion of Pakistan’s cricket began too late.

The struggles of the hosts against spin and their reliance on openers was exposed time as they were unable to make a breakthrough from a brilliant start from the captain Babar Azam (31 off 24) and Mohammad Rizwan (68 off 46).

The Pakistan captain displayed the grace and class he’s known for by kicking off the match with a whip between his legs in order to score an unbeaten boundary.

The crowd in the National Stadium chanted Babar’s name when he smashed Sam Curran through the leg-side once more before Rizwan attracted the attention of the crowd by cutting David Willey with utter dominance before whipping one through the square-leg towards his Multan Sultans teammate.

The Pakistan openers continued to score freely but only to be stopped when England leg spinner Adil Rashid was able to bamboozle Babar with an ineffective googly that smashed into on the left-hander during the 10th over and left Pakistan at 87-1 at the end of the match.

Despite the spry Rizwan was in the middle and Pakistan’s run rate slowed down with spinners operating at both sides.

The six that Rizwan scored against Rashid in the 12th over was the only boundary after the dismissal of Babar and Haider who entered the bat as number three, before being trapped at the deep leg of Curran in the 14th over.

The oncoming Shan scored a boundary by using additional protection from Moeen Ali on the fifteenth, but Rizwan was defeated by stumping three balls after he added 68 off 46.

Shan’s debut was marred after the left-hander was beaten by Rashid in the following over, leaving Pakistan at 127-4 at the end on the 16th full over.

The team was left with Iftikhar Ahmed as well as Mohammad Nawaz with the job to make the final flourish.

Iftikhar had a shot at the possibility of Willey over the long-on to make the big six, only to watch Nawaz dropping his stumps in Luke Wood’s speed and then swing five balls later.

Wood eventually got rid of Iftikhar (28) at the end of the over, but only after being hit again for a maximum, the pacer then dismissed the tailender Naseem.

Khushdil Shah not out 5

Usman Qadir not out 0

Moeen Ali not out 7