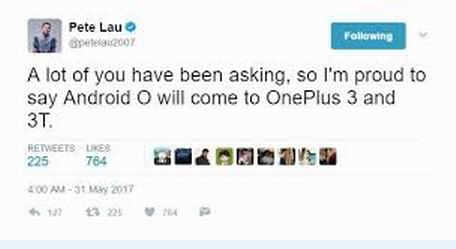 OnePlus 2 was a device which was extremely well received. It proved to give out all the premium features that you had expected in a flagship at that time, but at a much lower cost. OnePlus began making a name for itself in the market, and this was the reason that the OnePlus3 and the OnePlus3T both were devices which were highly anticipated for and they also had success to a great amount, much to the likings of the OnePlus2. The reason for this success was the same for the OnePlus2 – both these devices came with premium features but at a cost, many considered to be more than reasonable.

It is true that the OnePlus3/3T will have gotten two major updates by the time that Android O eventually gets out, and it is also true that both the devices will continue to receive security patches, however, on one hand, what many cannot understand is why a phone that came out just nine months ago, will not be getting any major update beyond the Android O. This is especially weird when you consider the fact that the OnePlus3T and even the OnePlus 3 packs more than sufficient hardware to support at least one major update beyond that of the Android O.

As for the foreseeable future, OxygenOS on the OnePlus3/3T will be updated to version 4.5 in the next month or two, though a security patch will arrive “soon.” Finally, Oliver confirmed there are some features, such as the OnePlus 5’s Reading Mode, that will not trickle down to the OnePlus3/3T due to hardware limitations.

Huawei GR3 is on Its Way To Pakistan Market Soon