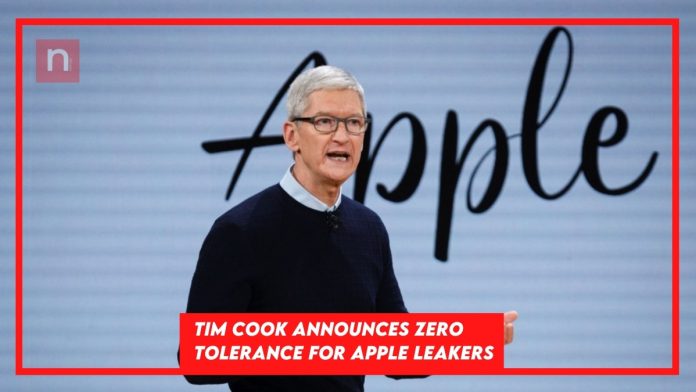 These are testing times for tech giant Apple as the company continues to counter the embarrassing leakage of its trade secrets as well as the unreleased product information that is leaked courtesy or insiders. The company took some measures too, however, much to its annoyance, the trend just continues to proceed. There are still indeed Apple employees that have taken upon the habit of trading rather vital product information for the sake of money – much to the detriment of the brand itself.

The company’s CEO in Tim Cook has had a raw deal of the seeming effective syndicate, as his email to employees showing concern over this particular trend also was subject to being leaked, as it found its way onto the public domain. In the email, in accordance with what the sources claim, Tim Cook had gone on to assert Apple is indeed using all means necessary so as to identify the sources that produce such leaks and all in all stressing that those who take such actions do not belong to the Apple family. A recent meeting which was held on the 17th of September was also leaked, while Tim Cook was especially unhappy over how his response to the ruling in Epic vs Apple also ended up being leaked.

Also Read: The Huawei ban is likely to continue even under Biden

Not to mention though, the aforementioned email also contained a thank you to all employees for their efforts thereby which the brand continues to sustain as a giant. It also went on to note some new product releases such as the iOS 15, IPadOS 15 and also the watchOS 8 amongst the other products which have been slated for release. However, unfortunately enough for the brand, even with the raft of measures that have been put into place in order to curb the leakage of its trade secrets, Apple still seems to be playing catch up with the leakers, as they continue to expose confidential Apple information – all at a rather increasing rate.

realme entitled Fast Company’s “50 Most Innovative Companies in China” of...

Xiaomi to Slow Down Charging?