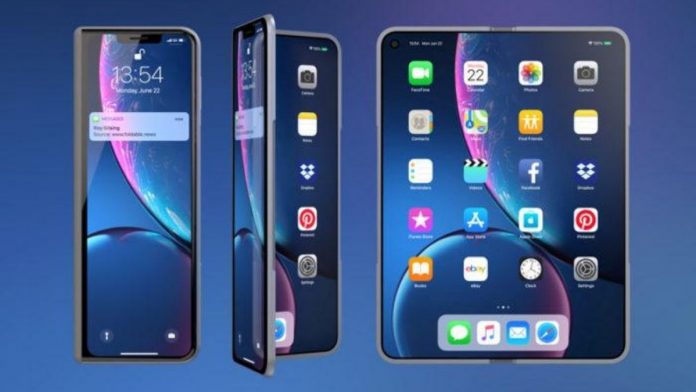 If you look at the modern day technology, we find that pretty much every brand is working towards making a foldable phone for their customers, seemingly jumping on the bandwagon of this new trend. Everyone who’s anyone is looking to step in to this product range and likewise, Apple might be onto something very unique. One of Apple’s patents published yesterday may be on to something pretty big. Their (Apple) idea is to release a foldable smartphone with a “self-healing” display that can repair dents or scratches on the screen, by itself which will be a game changer.

A patent regarding such a device was spotted by Patently Apple and it was originally filed by the company back in the month of January. The patent shows a foldable smartphone which is able to repair its own display without having the user manually intervening to help the device keep its look. As per the patent, the new smartphone will use heat, light, and electricity to repair a protective layer which is above the screen. This can be done while the device is charging or during predetermined schedules, times at which you are not using the device so when you do use it, you have a beautiful screen, as good as new. The patent has also added that the device’s hypothetical screen shall be able to lose and regain its shape to protect the sensitive internal structure of the display. This will in turn make the foldable phone’s display much more durable and will also attract a lot of customers.

This concept of self-healing smartphones has been tried and tested by LG before but it wasn’t able to hit the mark. The LG G Flex from 2013 was supposed to repair minor scrapes and scratches on the rear cover of the device but it wasn’t able to showcase that in the live testing and hence, had to be annulled. However, since it is only a patent, we are still waiting for any clear indication of whether the US giant, Apple is working on a self-healing foldable phone. Even if the news is true that Apple is working on such a device, such a technology would take years to perfect and release commercially, so nothing should be expected until at least 2022.