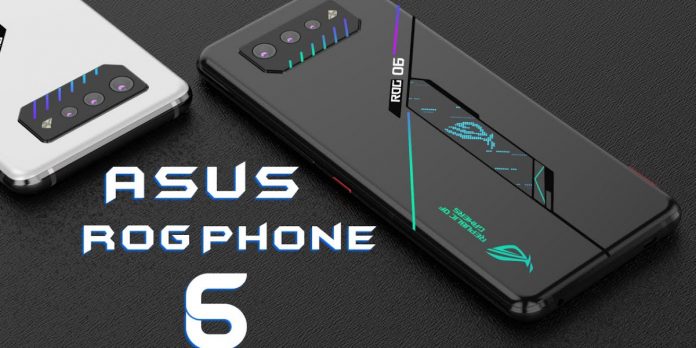 While everyone’s eyes are fixed to Asus’ ROG Phone 6 launch event that is only two days away, Leakster Evan Blass has posted a few official photos of the anticipated ROG Phone 6.

The specifications of the phone are out, including the 6.78-inch AMOLED display that has the screen’s refresh rate of 165Hz. Also, we know it will come with Snapdragon 8 Plus Gen 1 underneath. These leaked photos give us a full glimpse of the phone’s design. Let’s look them up.

As can be seen in the photos shared by the tipster The front design of the device is similar to older generation of smartphones.

Asus does not play about with the design since it’s a favorite among people who use it. The photos show a massive display with bottom and top bezels, as well as stereo front-firing speakers.

At the rear, the phone features a triple camera setup, ROG gamer branding, as well as on the back, there is an RGB LED matrix that is in the form in the shape of an ROG logo that is located in the corner. The photos indicate that the phone will come in two color options: white and black.

ASUS ROG phone 6 will flaunt the 6.78-inch AMOLED Full HD+ screen with fast refresh rate of 165Hz, and a fingerprint scanner built into the display to ensure security.

The device will run on the most recent Snapdragon 8+ Gen1 chipset that comes with up to 18GB of RAM, and up to the 512GB built-in storage.

In terms of software it will be running Android 12 based ROG UI from the beginning. It will also be powered by a dual-cell battery of 6,000mAh with fast charging support of 65W.

For optics, it’ll have three rear cameras on the back, which includes the main camera with 64MP, which is and an ultra-wide as well as a macro sensor. In front it will feature an 8MP camera to take selfies.

HarmonyOS launch set for the next year