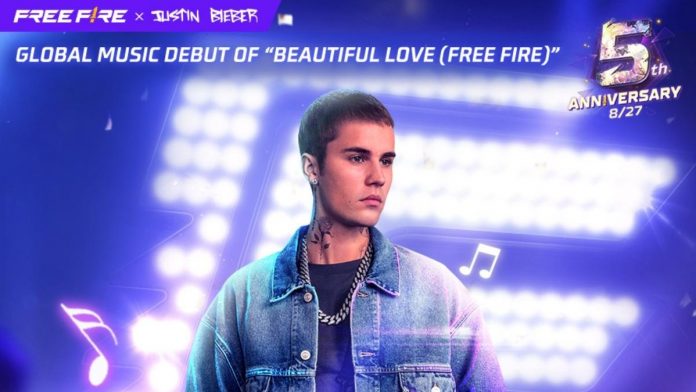 Free Fire’s 5th-anniversary festivities will culminate on 27 August alongside a carnival of events in the game and beyond, including an in-game performance and a new track by Justin Bieber. The global superstar will perform, Beautiful Love (Free Fire), on Free Fire’s virtual stage for the first time. During the event, fans and players participating will also get a chance to get up close with Justin Bieber’s in-game character, J.Biebs, through a series of minigames.

Get a sneak peek of what’s in store this weekend!

On 30 August, “Beautiful Love (Free Fire)” – the song dedicated to the milestone year of Free Fire – will also be released globally on music streaming platforms such as Spotify, prior to the official release of the music video in September.

A variety of exclusive items and rewards will also be available to players and fans on 27 August, including a character modelled after Justin Bieber. Among the collectibles co-created with Justin Bieber will be an exclusive sports car, groove emote, and more!

More to come in September

In the wake of the 5th Anniversary celebration, players can still look forward to new content in the pipeline. The Reunite the World special event will finally wrap up on 3 September with the Memory Capsule chapter, where players can complete the final few missions. The final chapter (Memory Capsule) will feature past Free Fire events and tokens redeemable for time-limited rewards.

Also Read: India is a major obstacle to Krafton’s battle-royale game BGMI two years after the…

Players can also enjoy Droid Apocalypse, a new in-game mode that will strike on 3 September, while reeling from the high of the 5th Anniversary celebration. The new game mode features a 12-player match between Humans and Droids that begins with an assigned “Droid” player, who will assume the form of a new avatar and attempt to transform the other players (Humans) into Droids. Humans, on the other end, will strive to defeat the Droids in the match to win.

Stay tuned to Free Fire’s social media channels for the very latest on its 5th anniversary celebrations, and more.

Garena is a leading global online games developer and publisher. Free Fire, its self-developed mobile battle royale title, was the most downloaded mobile game in the world in 2019, 2020, and 2021, according to data.ai, previously known as App Annie.