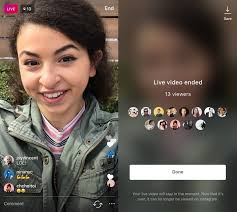 It’s not an update that we will see in immediate terms, however, Instagram will allow its users to add their friends to their live streams. It is also true that Instagram is not the only service which allows users to do so – with FaceBook also joining the party, allowing its users to do dual live streams, ever since May. But because of the fact that FaceBook owns Instagram, it is probable that it will not be long till we see the image-centric photo network being presented with the same feature.

If you think that adding people to your live stream would be a difficult thing to do, then you have got it all wrong, because achieving this is not rocket science at all. People can be added quite easily and simply by pressing the icon with the two smiley faces – which is found next to the comment field. From here onwards, you can select whichever friend you want to broadcast with, while the screen splits vertically in the process.

Now if you think that there is some difference in the usage of the app when you are broadcasting with some else, then you are wrong. Even when broadcasting with someone else, everything from comments and hearts to the ability to save the stream to your Story remains the same. In an alternative manner, of course, you can choose the discard option, and do without the live video.

One of the most interesting things that we have seen regarding this update is the fact that there are only a few people which are actually carrying out the testing which the update has presented us with. It may seem quite obvious that a more widespread roll out will take place over the course of the next few months.

Sports car is ready to fly on Mars with Falcon Heavy...

Huawei Live finale – The future of Pakistani music is crowned