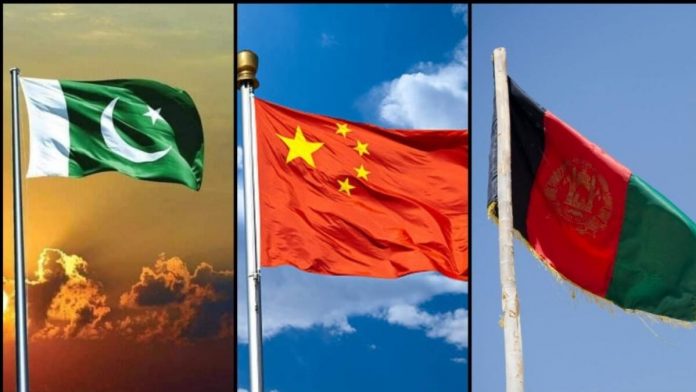 The Federal Minister of Planning, Development and Special Initiatives Ahsan Iqbal presided over an initial Joint Coordination committee (JCC) session on Monday, to discuss the developments made in the preparations for November 11th JCC meeting on the China-Pakistan Economic Corridor CPEC that is scheduled to convene in the coming month.

The Foreign Minister Sohail Mahmood apprised the meeting of the third International Cooperation and Coordination Joint Working Group (JWG) meeting which was held online on the 22nd of July.

The report said China valued Pakistan’s efforts in providing an unhurried and secure business environment as well as the leadership’s dedication to build CPEC by bringing it to “Pakistan rapidity”.

The group discussed participation of third parties and the extension the scope of CPEC for Afghanistan. It was also mentioned that collaboration between think tanks from both sides is needed to strengthen the economic and strategic cooperation within CPEC.

The minister was informed of the initiatives designed to increase awareness of the CPEC narrative both at the global and national levels.

In the course of the meeting, the Power Division highlighted the agenda for the upcoming ninetieth JWG on energy that is scheduled for august’s first week.

It was announced that 1,124 megawatt Kohala as well as 700.7MW Azad Pattan hydropower projects along with the 1,320MW Thar coal-powered power plant are expected to be discussed together with the Chinese side at the next JWG meeting.

Additionally, a joint study to determine the further development for Thar coal has been added to the list of the plan.

The minister emphasized that steps were taken to supply sufficient power to Gwadar city and highlighted the necessity of renewable energy projects to support Gwadar city’s development in the near future.

The Ministry of Information Technology and Telecommunication presented to the meeting the agenda for the upcoming 2nd JWG about IT with a focus specifically on ICT infrastructure, policies and regulation Human resources development, and cyber security.

The planning minister emphasized the need to cooperate between Pakistan and China on China’s IT sector, since China was emerging as an innovator in artificial intelligence. cooperating with China in this field could bring immense benefits for Pakistan.

Furthermore the group also discussed plans that are in the socio-economic and agricultural sectors that will be discussed at the 11th JCC Huddle.

It was also highlighted China’s growing agricultural market could be a huge opportunity to export Pakistan’s products.

It was emphasized that mechanisation and modernisation of the agricultural sector should be undertaken in Pakistan within the framework of CPEC in addition to other measures must be implemented to encourage agricultural development and to tap into the Chinese market to benefits for both countries.

The foot and mouth disease (FMD) and questions of quarantine were specifically identified as significant obstacles that hinder exporting meat to China. However, a representative from the Ministry of National Food Security and Research told the gathering that the issues were being dealt with in a priority fashion by Chinese assistance.

The minister ended the session by stressing the importance of the people-to-people exchange programs in China as well as Pakistan in how they can aid in the economic growth in the nation.

He urged the secretary of planning to come up with plans to improve exchanges within CPEC to ensure that the next generation of leaders across all fields can be exposed to the developments in China and integrate it into the advancement of Pakistan.