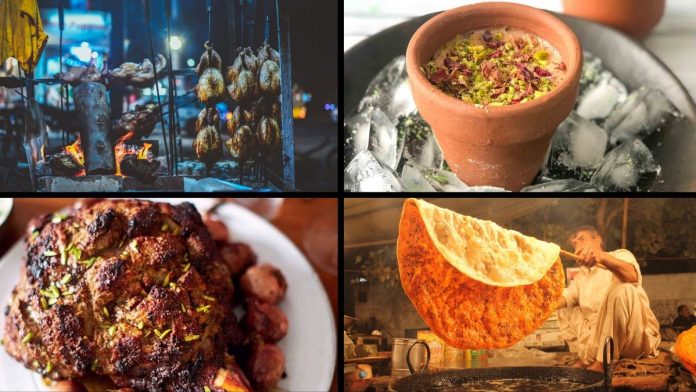 From the aroma of Gawalmandi Food Street to the takatauk sounds of Lakshmi chowk in Lahore, from Port Grand to Burns Road in Karachi comes the tale of spices, desi ghee tarkas and recipes passed from generation to generation. Pakistan with its rich historical backgrounds, once the hub of the Mughal empire holds stories and priceless treasures of finger licking cuisine that one can not resist experiencing.

Sajji سجی is a dish originating from the Balochistan province of Pakistan. It consists of whole lamb or chicken, in skewers (fat and meat intact), marinated in salt, sometimes covered with green papaya paste, optional stuffed with rice, then roasted over coals. Sajji is considered done when it is at the ‘rare’ stage. It is served with a special bread “Kaak”, “roti” or “naan”, which is baked in an oven, wrapped around a stone “tandoor”. Sajji is favourite dish of Baloch people and is available in all regions of Pakistan. Regional varieties are found with subtle differences in flavouring notably in the urban centres of Karachi, Islamabad or Lahore, uses chicken instead of lamb, and is roasted until it is medium or well-done.

Peshawar like Delhi has an old walled city and a rich culinary tradition. It is famous for its Namak mandi which is not a salt market but a place known for its delectable food! Known for using minimum spices and sometimes just salt, Namak mandi dishes are char-grilled or made in kadhai and are known for retaining the original flavor of the main ingredient.

Peshawari food has a dominant Pashtun influence but a lot in its taste and ingredients borrow from the city’s rich culture and history.

Must Read : Karachi Eat Stalls that are reinventing traditional dishes

Qatlama: This out of the world bread looks like a large thin-crust pizza which is actually a deep fried bread topped with gram flour, chili paste, and green moong chilka that gives it a crunchy flavor.

The chicken behari tikka is made more with green chillies rather than the red traditional chicken tikka. Chicken behari tends to be more tender too. The crispy deep fried paratha perfectly complements it. Sitting on plastic chairs by the side of the road feeling the cool city breeze and breaking into a piece of chicken with a piece of paratha. No true city life experience is complete without watching the traffic go by while enjoying some great road side food.

For the more adventurous foodies amongst us, the Taka Tak  is more than just food. It is theatre. The exhilarating sound of the sharp knives falling hard on the karhai to slice up different organs into a mix of flavours makes waiting for the food all the more exciting.

Kulfi is an Indian sub-continent ice cream made from khoa (similar to sweetened condensed milk). The kulfi is frozen inside a matka, a small clay-cup.

The pistachio flavour, vibrant and nutty, and the saffron is also very interesting, floral, and undoubtedly vibrant..