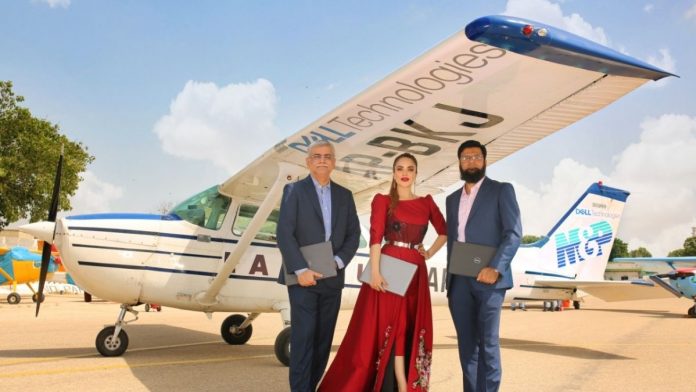 Under the campaign, an aircraft fully branded with Dell Technologies will do low flying all over Karachi during next five days for mass awareness about latest series of the Dell’s Latitude Laptops.

The launching ceremony of this aerial advertising campaign-the first of its kind in Pakistan-was held here at Old Airport on Saturday.

Speaking on the occasion, Country Manager of Dell Pakistan Naveed Siraj said that the Dell’s latest 10th Generation Latitude laptops would facilitate a large number of professionals from different fields who had been working from home due to the Covid-19 pandemic.

He said that the Dell had the responsibility to provide highest performance laptops to people who chose to work from home or wanted to remain mobile while performing their duties.

He said this campaign showed that the Dell’s partnership with M&P is touching the limits of the sky. “We want to work with them at every level so that we effectively serve our valued customers” he said.

He said that Dell’s partnership would ensure availability of its latest products in 50 cities and towns across Pakistan where the distribution network of M&P was present. “It is a partnership between the world’s largest technology company and one of Pakistan’s largest distributors,” said Mr. Naveed Siraj.

Also speaking on the occasion, M&P’s Business Head Muzzamil Athar said that the M&P was the largest distributor of IT and Telecom products in Pakistan.
“This campaign will make people realize that branding and quality of the Dell’s products are reaching new heights.” he said.

He said that the Dell was providing to its customers in Pakistan laptops having high performance with specialized features to help business customers.

He said that any channel partner took the best photograph of this branded aircraft flying over Karachi during next five days would be given a free Dell’s Latitude Laptop.

He said that resellers of the Dell’s products in Pakistan who sell 100 pieces of latest 10th Generation of Dell’s Latitude Laptops in the current quarter would be offered flying experience in this aircraft for one hour.

It is also informed on the occasion that the mode of aerial advertising doesn’t create the civic issues for the general public, which is otherwise caused by the conventional forms of advertising while this innovative method is also quite appealing and attractive for the viewers. The aerial advertising also covers a large number of prospective buyers within shortest possible time.

Need a job at Apple? The CEO Tim Cook wants you...