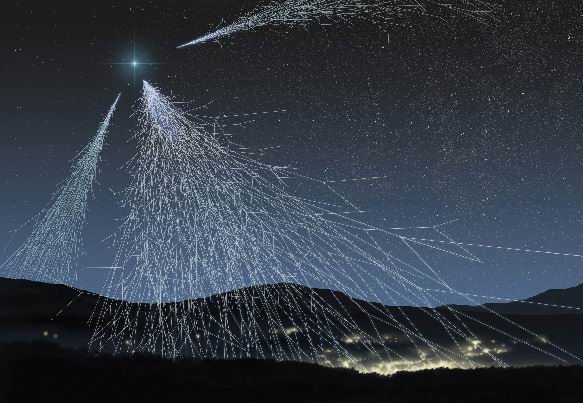 The Pierre Auger Collaboration has definitely put an answer to the question of whether or not there are particles from outside the Milky Way Galaxy or not. The articles go by the name of –  “Observation of a large-scale anisotropy in the arrival directions of cosmic rays above 8 + 1018 eV”, and according to some expert opinion, the study of the distribution of cosmic ray arrival will be the first step in the determination of where the extragalactic particles originate from.

The largest ever cosmic ray observatory was built, in order to help the scientists to collaborate and work together. The observatory stands tall in Pierre Auger, an observatory which, by the way, is found in Argentina.  Included in this collaboration are David Nitz and Brian Fick, professors of physics at Michigan Technological University.

Karl Heinz Kampert, a professor who is present in the German University of Wuppertal, stated that : “We are now considerably closer to solving the mystery of where and how these extraordinary particles are created, a question of great interest to astrophysicists.” This also seemed to be the opinion of the spokesperson for the Auger Collaboration, a collaboration which involves more than 400 scientists, who come around all across the world, ranging from 18 countries.

Further continuation can be taken from the fact that Carl Sagan, a famous Astronomer once stated –  “The nitrogen in our DNA, the calcium in our teeth, the iron in our blood, the carbon in our apple pies were made in the interiors of collapsing stars. We are made of starstuff.”

So, exactly how are cosmic rays detected? Well, such rare particles are detectable because they create showers of electrons, photons and muons through successive interactions with the nuclei in the atmosphere. These showers spread out, sweeping through the atmosphere at the speed of light in a disc-like structure, like a giant dinner-plate, several kilometres in diameter. They contain more than 10 billion particles.