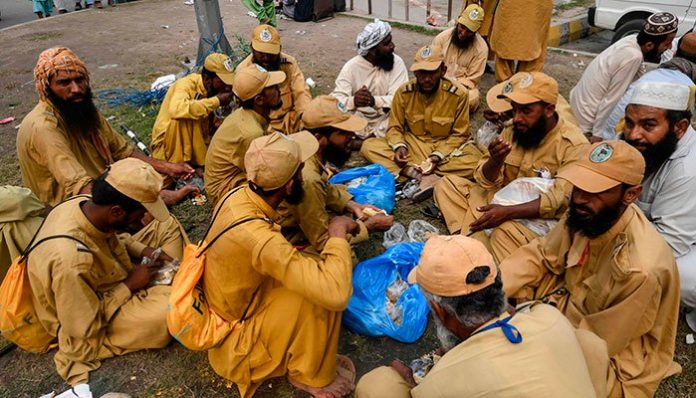 So following the recent trend against the current Prime Minister of Pakistan, Maualana Fazal-Ur-Rehman has also taken to stand up against the PM declaring him as un-fit for the office, with that he has started his own take on the dharna and up till now thousands of people have been living in the tents at Kashmir Highway for JamiatUlema-e-Islam-Fazl’s (JUI-F) sit-in and well it has been found that the people have been facing some inadequate hygiene conditions. As per the dharna participants, due to the lack of toilets and water supply for this big number of people is leading to diseases and has created some serious problems all round.

Even after claims of security and administrative wing by the JUI-F’s ‘dharna’ Ansar-ul-Islam, the dharna venue has been found to reek of stank at many places with garbage especially styrofoam boxes and glasses all around the place.Now the loyal participants of JUI-F do agree to the conditions, their answer still remains “we are determined to stay until our leader asks us to be here. Such things will have no impact on our dharna.”

A participant was asked about the conditions in the dharna to which he relied that “Yes the hygiene issues are irritating. We have people deputed to clean the place and Asarul Islam also joins them. We are not like the participants of 2014 ‘dharna’,”.Another man who has a small bethak(where people sit) that “We sell breakfast here which includes parathay, chickpeas masala and eggs,”. According to Bashir the owner of the bethak, they are able to sell around 200 parathas every morning. “There are many other bethaks around and people also cook their own food in tents,” said Bashir.

Must Read: Yoast SEO behind the curtains improvements

Garbage strewn around khokha depicted the state of cleanliness and the stinking nullah on the way that leads to the sit-in venue talked volumes about the sanitation situation. The 150 makeshift toilets are definitely not enough for this number of people.“Some use these toilets whereas others use the toilets of nearby mosques when required,” said Ubaid, who insisted that they were very cautious about the cleanliness.“People clean the places on their own as well. But still there is no mechanism of picking the garbage,” he agreed.

He said that this issue combined with harsh weather was leading to different diseases. He said that till date, more than 700 people have been sick. “Majority suffered from fever, flue and cold. Three old men also died,” he said.About the assistance offered by city administration, one participant proudly said that they made them run away.Adding to their woes, the heavy rain and storm, few days, ago washed away the temporary washrooms arranged for the dharna participants. “We had around 150 toilets. A good number of those toilets were washed away but majority has been rebuilt,” claimed another participant.

In a bid to clarify the issue and to in turn gain support from the people who face such in adequate conditions the Senior Vice President JUI F Mufti Awais Islam agreed to the cleanliness issues and said. “Obviously the problems are there. It is a big crowd with people speaking different languages. We have group of people deputed to keep check on cleanliness. People from Ansarul Islam also give duties day and night to keep the venue clean. We are not like 2014 ‘dharna’ participants who used to leave garbage on the road,”

The issues still remain and the people participating in the dharna are not planning to stray away just yet, call it loyalty or stupidity, Maulana’s loyal supporters have no plan of going away just yet. The only question now is how long this dharna will continue.

So after Google+, Google’s Allo messaging application is also set to...

PITB Launches the Project ‘Herself’ To Promote Female Freelancers

Chief of Army Staff General Qamar Bajwa has Gotten the All...