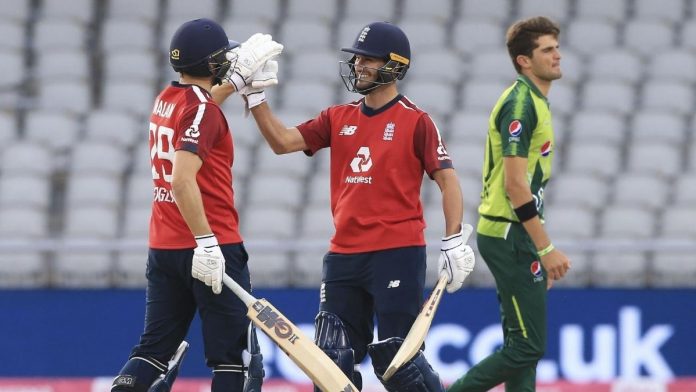 After Pakistan set a very challenging target of 195 in 20 overs thanks to a quickfire  69 of 36 balls from Hafeez, it took a captain’s innings from Eoin Morgan to help England achieve a five-wicket win against Pakistan at the Old Trafford in the second T20 on Sunday.

When chasing for a 196 win, Morgan scored 66 from 33 balls which included six fours and four sixes. Along with him, Jonny Bairstow also scored a fast 44 off 24 balls and Tom Banton 20 off 16 balls who got their side off to a pretty good start with an opening stand of 66 in 38 deliveries, however, they fell victim to consecutive balls from the leg-spinner Shadab Khan in the seventh over.

On came Morgan who scored 66 in just 33 deliveries and Dawid Malan who scored 54 not out off 36 balls and together the two led the counter-attack and were able to. Contribute to a match winning 112-run partnership for the third-wicket before Morgan got out with the home side requiring only a mere 18 runs for the win. On the other hand, Malan was still standing not out and he calmly guided the hosts to comfortable win, with five balls to spare.

Pakistan were actually not that bad in batting in this T20I, it was their bowling which surprised most, after being put to bat, Pakistan posted 195 for four in 20 overs in the first innings of the game. The opening pair held a pretty solid 72 run partnership for the first wicket with Babar Azam smashing 56 from 44 balls, while Fakhar Zaman scored 36 from 22 balls.

After the departure of Fakhar in the ninth over, Mohammad Hafeez & Babar carried on the momentum. Hafeez chipped in with a 36-ball 69, including five fours and four sixes which helped Pakistan reach a more than competitive total of 195. The pick of the England bowlers was leg-spinner Adil Rashid, who returned figures of two for 32. All in all England now have a lead of 1-0 in the three-match series which was reduced to just two matches because of rain stopping play in the first fixture of the three match series. The last match will be played on Tuesday at the same venue.

Next ICC Chairman to be Unlikely From The Big Three