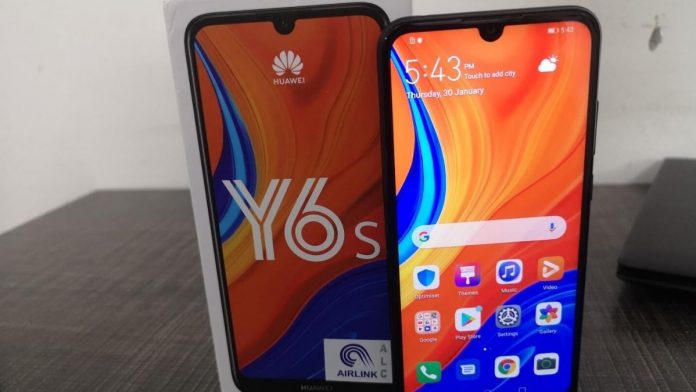 Huawei only recently launched the Huawei Y6s and it comes in their line of phones which have been made affordable for the users who desire good, reliable and a phone with loads of features all at a fairly reasonable price. The new device has a pretty nice design and some of its prominent features are that the phone will come with a Helio P35 chipset, 13MP rear camera, 3,020 mAh battery all at a pretty economical price giving users a chance to get something fairly decent at a good price.

The new device comes with a two-textured design at the back somewhat similar to that of the Google Pixel and the Huawei Y9 Prime 2019. The phone which comes with a pretty nice color, named Orchid Blue, the upper portion of the plastic back is glossy, while the lower half as a matte looks to it. In terms of dimensions, the device is pretty slim and lightweight and even though the device is made with a plastic finish at the back, the device feels pretty good if you’re holding it.

On the backside of the device, you will find the camera and the circular fingerprint scanner which feature on the device. The volume rocker and the power button can be found on the right side of the device. On the top end of the new phone you will also find a 3.5mm headphone jack slot and a noise-canceling mic for the loudspeaker, giving a decent sound system to the users.

Must Read : Honor 9x Review: Jack Of All Trades

The Y6s comes loaded with a large 6.09-inch display which has a screen resolution of 1560 x 720-pixel HD+ resolution, however the device is has certain limits though, one of the issues is that the device is only capable of viewing videos and playing games at 720p, but given the price some users may overlook those flaws.

The panel is TÜV Rheinland certified and has the ability to block blue light in order to help the strain in a user’s eyes. Details on the device are rather sharp which gives it a expensive look as well.

The phone runs the EMUI 9.1 user interface which is based on the Android 9 Pie which runs as the Y6s’s operating system. Once you unbox the device, Huawei defaults to its standard  home screen app arrangement, however, users have the ability to modify it to a drawer-style in the settings, if they would like to have something different when it comes to the theme of their home screen. Users also have the accessibility to change the Navigation and they can in turn also change from a three-button one to a gesture-based one. The Y6s has the pre-installed Google apps and in addition to them they have also put in a number of third-party apps like Booking, Agoda, Netflix, and Camera 360. Huawei have also added the Huawei App Gallery and HiCare in the Y6s, apps which we have also seen in the older devices that Huawei have released. The new device also comes equipped with features such as the Ride mode, Optimizer, Phone Clone, Party Mode, and much more for the ease of the users.

So the all new Y6s packs a single 13MP shooter on the rear of the device while on the front of the device is a camera which is a 8MP snapper.

The standard camera app defaults to the Beauty mode switching to the 8MP snapper. However, users should not be worried as they have the option to switch to the standard Photo mode if of course the Beauty mode isn’t up your ally. In the standard mode, when we tested the phone for its results the phone did not perform that well, the images were washed out under ample lighting. The details are just good enough as we don’t see much sharpness in the results.

Moving on to the Beauty mode, the images still had that washed-out feeling to them however, in this mode the camera was able to smoothen out the skin and blur out the imperfections that many would want, however, be vary as if you increase the beauty mode by 5 will result in a flat-looking, overly-processed selfie.

Moving on, the rear-ended 13MP primary camera gives you photos with some pretty vivid colors  and decent details, overall we were impressed with the results. The phone does have the capability of giving overly saturated photos at times, but that’s really not much of an issue. There is a slight delay between the shutter and the camera button so quick movements will definitely result in blurred images. Other than that, they are more than decent to be users on a social media platform or for sharing purposes. Testing out the camera in lowlight conditions gave us photos which had a lot of issues in them and also gave out some pretty muddy photos, nonetheless in terms of overall performance and keeping the price in mind the device performed fairly well.

The Y6s has a built in Mediatek Helio P35 chipset which is coupled with a 3GB RAM and 64 gigs of storage. The device handled the Light and moderate tasks such as navigation, social media and web browsing, fairly well and without any issues. When we ran several apps altogether, we started facing some minor issues in the efficiency of the device, with lags here and there. In terms of gaming,  games with heavy graphics such as Call of Duty, Mobile Legends, and Asphalt 9, we faced a lot of lags and the issues in the frame rate efficiency.

In terms of unlocking the device, the Y6s has a rear-mounted fingerprint scanner and is also capable of supporting the face unlock. They both work well and have a quick response time.

To measure the 3,020mAh battery capacity of the Y6s, we put it through PCMark’s battery benchmark and our standard video loop test. In PCMark, the Y6s totaled 10 hours and 24 minutes. Sadly, the Y6s comes with a micro USB charging port and not a USB Type-C port.

Finally, in terms of pricing of the said device, the Huawei Y6s is going at a price of PKR. 20,899 in the Pakistani cell phone market, which a pretty good price is given the features of the device.