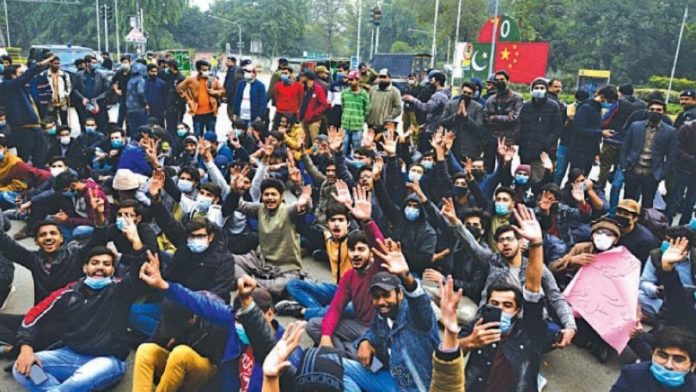 Numerous wounds were accounted for after the Punjab Police on Monday purportedly implemented charged understudies challenging nearby tests in Lahore.

As per the Progressive Students’ Collective (PSC), its Lahore president Zubair Siddiqui, who was driving the protest, was captured by police from the University of Management and Technology (UMT).

The PSC later tweeted that Zubair and some different understudies were “fundamentally harmed and have been taken to ICU (emergency unit)” they were supposedly twirly doo charged by police.

It added that understudies were assembling outside UMT to challenge “gunda gardi (thuggery) of Punjab Police which twirly doo charged understudies”.

As far as concerns them, police prevented reports from getting implement charge. Saddar Division SP (Operations) Hafeezur Rehman Bugti revealed to Dawn.com that police “have not tormented [any students], and won’t torment”.

He added that no first data report (FIR) has been enrolled and police have requested that the fighting understudies hold exchanges with the college organization.

The authority additionally said that no one was captured.

In the interim, extremist Ammar Ali Jan unequivocally censured the episode, saying that the public authority had “crossed all cutoff points”.

“For longer than a year, this fundamentalist system has undermined, captured and enrolled FIRs against understudies. Yet, today, it has crossed all cutoff points by severely assaulting tranquil protesters in the city,” he tweeted.

“[Government] will presently confront the full force of the understudy development.”

The protest is as yet progressing.

Ulema Also Come Out in Support of Construction Of Temple

Govt All Set To Introduce EV Charging Stations On Motorways