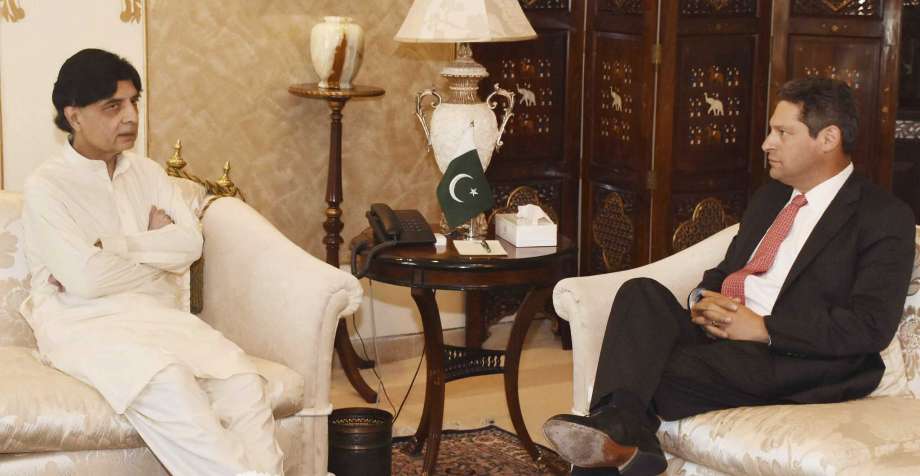 In the main progress on the topic of Blasphemous Content, efforts being made for opposing and eradicating sacrilegious content from social media, the Interior Minister received Vice President of Facebook Mr. Joel Kaplan, on Friday and discussed different steps and actions being taken to get rid of blasphemous content that is unlawful in Pakistan

Facebook, on its part, has repeated its promise to maintain the platform secure and endorse values that are in congruence with its Community Standards. It also entrusted to eliminate fake accounts, overt, detestable and challenging material that incite violent behavior and terrorism.

The Spokesperson of the Interior Ministry giving details of the meeting said that it was the first time a leading member of Facebook administration dealing with Global Public Policy had visited Pakistan to discuss the approach ahead and deal with the issue of exploitation of social media platforms, particularly Facebook, which has over 33 million users in Pakistan at the moment.

The Interior Minister has been playing a positive role in connecting the internet service providers and determining solutions to the concern of mistreatment of social media, said the spokesperson. This also consist of calling together of a special meeting of the Ambassadors of the Muslim countries in March on a solo point agenda to argue blasphemous content on social media and how to efficiently raise voice of the whole Muslim world in opposition to the insanity unleashed against Islam and sacred personalities in the name of freedom of expression. All the discussion went on a meeting of the Minister with Secretary General OIC on 11 April 2017 on this serious issue.

While talking to the Vice President, the Interior Minister said that the entire Muslim Ummah was really worried and has serious concerns over the mishandling of social media platforms to spread blasphemous content. “Nothing is more sacred to us than our religion and our holy personalities”, the minister said.

He said that the government of Pakistan definitely believes in freedom of expression but it cannot permit anybody to mistreat social media to hurt religious feelings or commence illegal activities.

The Minister added that “we encouraged the understanding shown by the Facebook management and the collaboration being extended to us on these issues.”

To more this point in Pakistan, the Interior Minister also encouraged Facebook to launch offices in Pakistan. Local offices of service providers would not only assist them to expand their outreach but would also be influential in bringing the government and the service providers further nearer to each other and falsify a jointly valuable partnership, continued the Minister.

Huawei has an Operating System Solution for IoT Technology