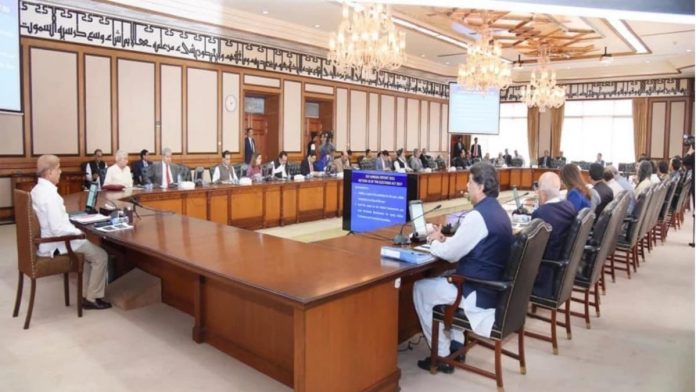 On Tuesday, the federal cabinet approved a two-day weekend of government employees. However, the decision to close markets early could not be made.

Power Division presented today’s summary of the “Energy Conservation Measure”, which included closing markets on Saturday and Sunday due to rising prices for petroleum products.

The meeting was chaired by Shahbaz Sharif, Prime Minister. Discussions also took place about measures to reduce loadshedding which has increased in recent weeks.

Marriyum Aurangzeb, speaking at a press conference after the meeting of the federal cabinet today, stated that all meals, lunches and high teas were banned in all government offices.

She stated that the government had banned foreign treatment and visits to the country for cabinet members and other public officials as part of its austerity drive.

She said that the government had also stopped the procurement of vehicles for officers and ministers.

Minister added that the government had begun to implement the austerity measures as of today.

She also stated that the cabinet approved a reduction of 40% in the petrol entitlement for government officials as part of the austerity plan to reduce expenses.

Marriyum Aurangzeb responded to a question about early closing of markets. She said that traders as well as the business community would be treated with confidence in the matter.

PM Shahbaz Sharif will meet all the chief ministers to discuss the matter and take them into confidence.

Minister added that there was a proposal to implement a Friday “work from home” policy. However, the premier has set up a committee to discuss it further and propose a framework.

Marriyum Aurangzeb stated that electoral reforms were the prime priority of the coalition government. She stated that they would launch an investigation at the highest level into Daska’s by-election fraud.

She stated that the Daska fraud in the by-election is an example for the Election Commission of Pakistan. According to the information minister, they will pursue the matter until its conclusion so that there is no possibility of a future sabotage of the elections.

After June 30, load-shedding will be reduced to two hours

Marriyum Aurangzeb stated that the loadheding time would be reduced from three hours per day to one after June 30, in relation to the loadshedng issue.

600MW of electricity from Port Qasim’s power plant would be added to national grid by June 30.

Minister for Defence Khawaja Asif suggested Monday that there be four and a quarter working days per week in order to conserve fuel and energy amid rising fuel prices and power scarcity.

He shared his ideas on Twitter by the defence minister and wrote: “In the current circumstances, all across the country, there should be an entire holiday on Saturday and Sunday, and a half-working day on Friday in each week.”

He suggested that there should only be four and a quarter working days per week. Additionally, there should be an increase of office hours by one hour.

The federal minister made a suggestion last week to alter market timings in a separate meeting.

Khawaja Asif strongly opposed the idea of opening markets between 1pm and 1am. She stressed the importance to only open markets in the daytime to make the most of sunlight, which is available for 365 consecutive days.

He stated that the markets could adjust their timings to save us 3,500MW, even without Karachi. However, he also said that difficult decisions must be made.