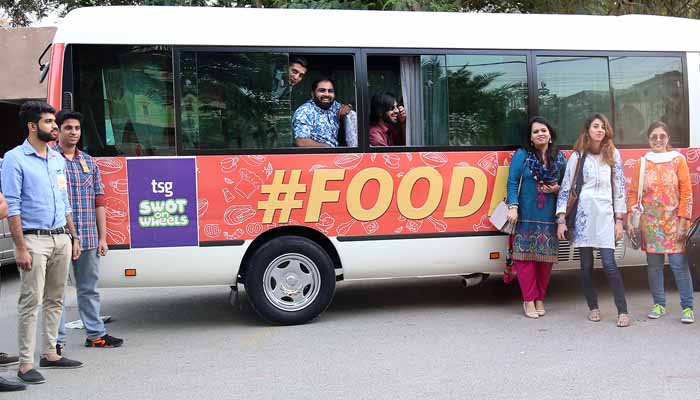 Foodpanda is Pakistan’s online food ordering company, which celebrated desi food upon a live filled Food run with TGS’s SWOT-on-wheels. Last Sunday a group of 20 foodies and bloggers went on a ride to visit Karachi on a cute orange bus, shredding all of their dieting plans. Some major food spots of Karachi were covered including Burns Road, New Town Masjid, Alamgir Road, Guru Mandir and Dohra Ji.

The Waheed’s Nihari at Burns Road at 6 pm was a treat for the taste buds. The perfect textured Nihari with Julian cut ginger with other toppings and a karak naan made everyone forget their diets. Next served dish was the famous silk textured kebabs, an absolute beauty.

Stopping early from the first stop to make place for others, the bus moved to Hanifia, the originators of Hunter beef burger in Karachi. The dried beef patty topped with fresh tomatoes and fresh buns was an absolute rejoice. The spicy sauce added flavour to the plain flavoured beef patty. The guests were served fresh sugarcane juice from Ice Cool to keep them going for other places.

Going for a food run in Karachi and not having barbeque is not fair at all. The next stop foodies stopped at was the Meeruth Kebab House at Guru Mandir. At the kebab house, they believe in serving kebab with Parathas not with naan so they did the same. The soft textured kebabs with ginger and green chillies served with special tamarind sauce on top were so tasty, no one could stop.

The famous Saleem Milk shop was the next stop of foodies where they had lassi, “Malai maar ke”. The lassi competition added thrill and fun to the tour and everyone had their glass finished in no time.

The thread to Dhaaga kebab

The Zameer Ansari’s dhaaga kebabs were simply irresistible. Despite being full, the flavour of kebab with the unique chutney and malai boti were not spared by any foodie.

A true desi will always have chaai at the end of the meals. So the bus stopped at Quetta’s Alamgir tea shop. The cup of tea was served with parathas but they were shared as everyone was so full.

A sweet end to Run

The journey was ended when the bus finally went to Saleem Qadir Uncle’s Gola at Dohra Ji. Crushed ice, syrups of all colors with flowing threads of condensed milk was what everyone was craving for. This was the first tour of Foodpanda and more will follow soon.

Tolerable adverts will be seen on Messenger same as Instagram and...