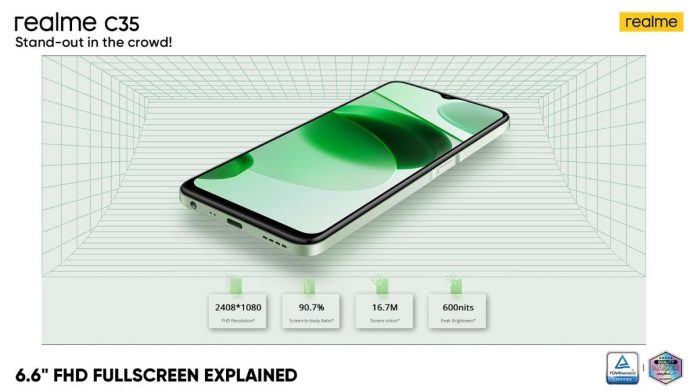 In today’s modern age, smartphones have replaced most common devices and become the default option to perform a variety of tasks and leisure activities. This has led to a massive increase in individual screen time over the years as smartphones have become more capable substitutes for daily activities thanks to developments in technology and the democratization of tech done by brands such as realme. With this increase in screen time it is paramount for your smartphone display to give you a comfortable viewing and usage experience without straining your eyes, being laggy and unresponsive, or displaying a dull color spectrum.

There are a boatload of factors that come into play when determining how good a smartphone’s display is which include but are not limited to the size of the screen, the screen resolution, and its screen-to-body ratio. Within the budget smartphone segment, we are going to examine three smartphones from major players in the industry: the realme C35, the Oppo A54, and the Vivo Y21T and compare the finer details of their screens to see which smartphone rules the budget smartphone segment in terms of its display.

Also Read: Why is vivo X80 Currently the Top Flagship Smartphone in Pakistan?

The first metric we are going to use in our comparison is the size of the screen. While there is only a slight difference in terms of screen size between the three smartphones, realme edges out the competition slightly coming out on top with its 6.6” screen in comparison to Oppo and Vivo’s 6.51” screens. Moving on to the screen resolution, the realme C35 features an FHD fullscreen display while the Oppo A54 features an HD+ Punch-hole display and the Vivo Y21T features a HD+ Halo Display. Of the three, the realme C35’s FHD display has the highest resolution of the bunch with a resolution of 2408 x 1080 while the other two feature screens of a lower resolution with the Oppo A54 sporting a resolution of 720 x 1600 and the Vivo Y21T sporting a resolution of 720 x 1600.

When it comes to the protection of the display, the realme C35 goes above and beyond the others, featuring a Panda Glass protective layer which provides great protection against scratches and cracks in this price segment. While it may not be as durable as Gorilla Glass, Panda Glass is manufactured using the same technology. The three handsets also tie on a few metrics. They all have a 60Hz refresh rate, can display 16M colors, feature multi-touch support and have an IPS LCD display.