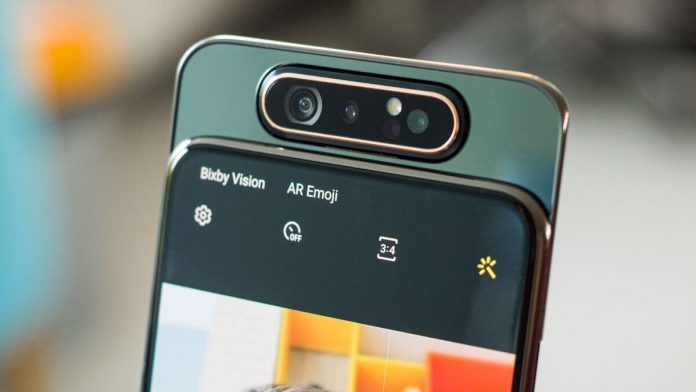 It is now being claimed that Korean manufacturer Samsung is now apparently working on the Galaxy A82 as its next flagship phone. Recently, the smartphone was subject to being spotted at Bluetooth SIG as well as Geekbench’s database. The handset will be succeeding the Galaxy A80, which made its way with a slide-up rotating camera module as one of its more major features. The Galaxy A82 is also expected to feature with an innovative camera design. And now, with respect to the latest reports, information over the upcoming phone’s main camera has been released.

In accordance with reports, the Galaxy A82’s camera setup will feature with a 64MP Sony IMX686 lens and not a Samsung ISOCELL GW2/1 sensor. As far as the auxiliary cameras go – there isn’t any information over those with respect to the A82. It happens to be unclear whether the smartphone is equipped with a slide-out camera – as was its predecessor.

Also, it appears as if the device could actually be aimed towards the South Korean market, and not the European one – but only for now. It is also said to make way with a Quantum Random Number Generator chip for the sake of better data encryption.

Also Read: How to quickly calculate the wattage of any iPhone charger

Past reports have gone on to indicate that the Galaxy A82 will feature with a Snapdragon 855 or Snapdragon 855+ chipset, four gigs of RAM, and Android 11 as its OS. The Bluetooth SIG listing of the phone only revealed that it happens to be equipped with Bluetooth 5.0.

With respect to the other information present, it is stated that the device will feature with 128 gigs of internal storage, a 3700mAh battery with the aid of 25W rapid charging support. The camera module of the A80 made its way with a 48MP main camera, an 8MP ultra wide lens, and a ToF 3D sensor.

Huawei reaffirms commitment to offering health and fitness solutions with the...