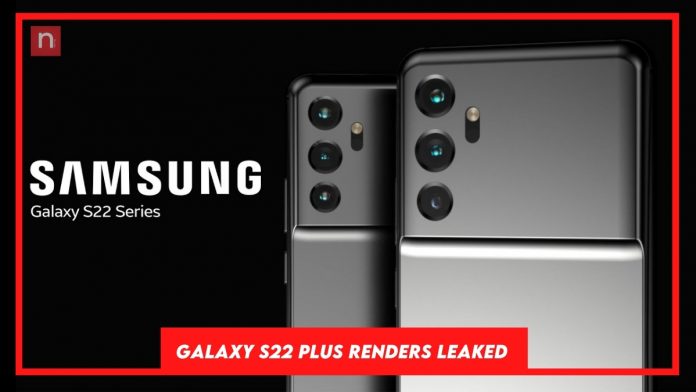 We finally got our very first supposed look at the Samsung Galaxy S22 Ultra two days ago as some renders with regards to the device were actually shared by a serial leaker in a public space. And now, by the looks of it, we also have a peak at the Galaxy S22 Plus as well.

Indeed the latest renders posted show the Galaxy S22 Plus in a green colorway. And by the looks of it, the S22 Plus seems to rather similar to what was offered with respect to its predecessor in the S21 Plus – with similarities including the likes of a front center mounted punch-hole cutout as well as a triple camera setup placed in the left corner of the rear cover of the device. As a matter of fact, even the position with respect to the flash seems to be similar to what was offered on this year’s phone.

As far as I/O go, it seems that the Korean manufacturer has actually moved the volume keys a little lower down the side of the phone when compared to the S21 Plus. Other than that though, you’ve got a USB-C port, speaker grille, as well as a SIM tray which happens to be placed right at the bottom of the phone. The camera bump has been said to bring the thickness to 9.1mm.

Oddly enough though, it has been claimed that the renders have actually been received as the S22 Pro rather than the S22 Plus. Of course though, we’ll have to wait a bit longer and look for more leaks before it can be made certain as to whether Samsung is indeed opting for a change in name or not.

Of course it won’t exactly be the first time that a Pro name was touted for an upcoming Samsung phone. The Galaxy Note 10 Plus was subject to severe speculation that it too will be called as the Note 10 Pro before it launched, however of course, things didn’t exactly pan out as so.

HTC Desire 20+ Launches With a Focus on Gaming