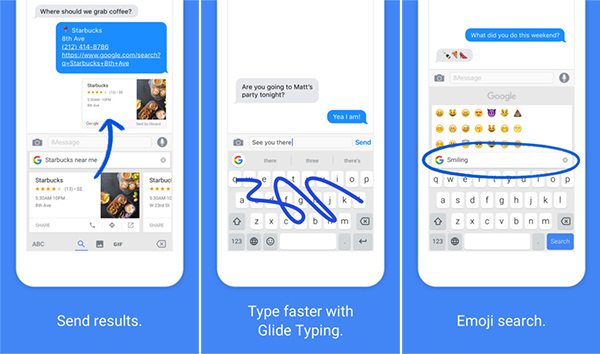 GBoard is getting a lot of new features on iOS, with some major changes. This very update combines two of best products of Google into one.

GBoard, Google’s own keyboard application, first came out on iOS devices and later on Android. Having already included some handy features such as built-in Google search, GIFs etc. After the release of Gboard on Android, Google ended up merging it with its already available on the Play Store, original keyboard application.

GBoard has been featured with support for Google Maps and YouTube and it also adds the ability to make users’ own drawings (doodles) to be used in a conversation. Now, while you tap the G button on the keyboard, you will access YouTube or Maps instantly, and it permits you to either share your location or videos.

With Google Maps been integrated into GBoard, users can instantly send their location to the person they’re chatting with or send any other location that they wish to.

Additionally, there’s also a new “ink” tab allowing you to draw the piece of art, basically doodling. Here you get various pens and color options.

Point to be noted is that on iOS, and also when rolled out on Android, Arabic language support becomes limited as some apps do not support the new Ink feature (like WhatsApp). Native Google applications, such as Allo as well as Apple’s iMessage will now support it along with some other third party messenger applications.

Note that the new features will come out for the Android version in the near future.