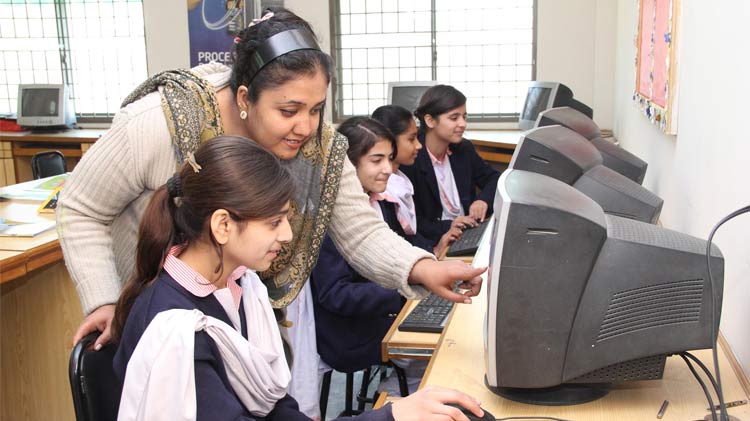 An MOU signing ceremony of Phase II of the project for “Establishment of Computer Labs in Government Girls’ Schools in Islamabad Capital Territory” took place here at MOIT today. Minister for IT & Telecom, Mrs. Anusha Rahman and Minister of State for CADD, Dr. Tariq Fazal Chaudhary have witnessed the ceremony.

The signing ceremony was held at Ministry of Information Technology & Telecom (MoIT) where a Memorandum of Understanding (MoU) was signed between Universal Service Fund (USF) / MOITT and the Federal Directorate of Education (CADD), for phase II of the project for establishment of Computer Labs in 119 Government Girls’ Schools in Islamabad Capital Territory. CEO-USF, Mr. Haaris Chaudhary signed the MOU with Director General of Federal Directorate of Education.

Through Phase II of this project, state of the art ICT facilities and trained human resource will be provided to 119 girls’ schools in Islamabad Capital Territory. As per the project details, 119 teachers will be hired to train 85,581 students. This project is being run in collaboration with Microsoft, which later will impart computer technical training skills including coding and cloud computing etc to students. It aims to benefits the girls at these schools by fostering digital coding skills and building early stage aptitude for ICT-related careers. The project is expected to empower these girls by equipping them with modern IT knowledge and opening the doors of the IT sector to them. This will also facilitate these young girls in becoming entrepreneurs, contributors to the knowledge-based economy, and the future builders of the nation. Earlier on, through phase I of the project, computer labs are being established in 107 schools in Islamabad Capital Territory.

Minister for IT & Telecom said that the project will improve the lives of many young girls by equipping them with ICT skills. She further said “ICT is the lever of economic progress. We are using this lever to empower the girls from the marginalized sections of society. Through this initiative, we aim to help girls’ students by making them computer literate and bringing them at par with students elsewhere in the world. She said that this program for girls will also help to reduce the gender disparity.”

On the occasion, Minister of State for CADD thanked all the stakeholders for their commitment to this project and said that the project will help in bridging the IT and education gap between the urban and rural areas of Pakistan.
Senior officials of Ministry of IT & Telecom, CADD, FDE, and USF also attended the ceremony.

ACCA upholds ‘Ethics’ as a key pillar for an Emerging Pakistan

First-Generation Students from TCF Make Their Way to Top-Tier Universities of...