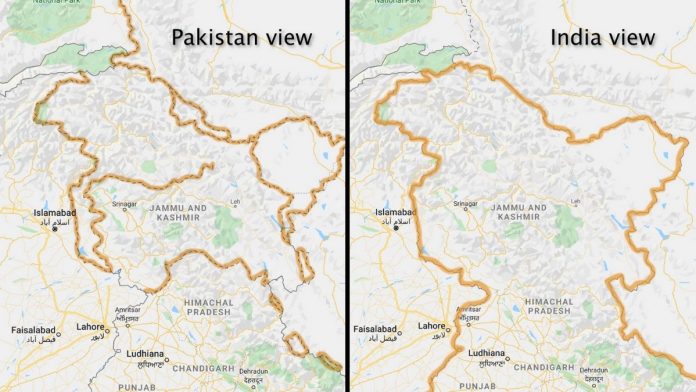 Pakistan and India have been involved in a death grip ever with regards to Kashmir, ever since partition. Kashmir is a lush, mountainous region which is muslim majority but the person in charge was a Hindi. With the partition, Kashmir was given to India, and this sparked outrage among the Kashmiris and among Pakistanis as well. Later, it was termed as disputed territory.

However, when you look at Google Maps, you might find some hypocritical viewing. Google has altered its Maps in such a way that the borders are redrawn depending on where you are viewing from. If you are in India, Kashmir is termed as Indian territory as the Indian border is drawn around it. However, for the rest of the world, it is marked with a dotted line representing disputed territory. Google, keeping everyone happy? Well, that’s not right.

Must Read : A thousand images released by search-engine giant Google of beautiful landscapes

Maps are the most accurate way of viewing places nearby, or when seeking directions. Map date back to a long time ago and have been used in the greatest of dynasties. We have had the advantage of using them on our phones but how differently Google Maps is shown to different people makes it an inaccurate resource.

Even though, the earnings from Google Maps is going strong, expected to add $1.3 billion to Google’s earnings, politically shaping the countries is a manipulation of helpful technology and might as well go against Google policy of providing the most accurate data.

With around 80% of the total users using Google Maps and no competition in this sector, Google has fully exploited the monopoly, and has been altering data to its liking so that it compromises accuracy for politics.

Robots Will be Taking Over the World : Here’s how You...