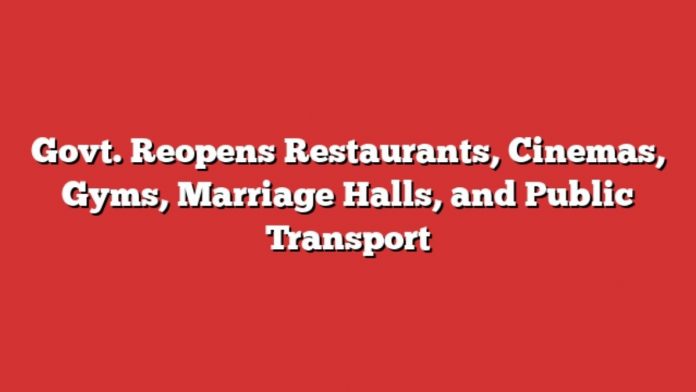 It seems that the days are finally coming where people will be allowed to operate their previous lifestyles once again, without any hesitation but this time around certain SOP’s will have to be followed. The Federal Minister for Planning, Development, and Special Initiatives, Asad Umar, has just announced that the government are all set to lift restrictions imposed in March on the recreational and hospitality industries from the 10th of August, much to the satisfaction of the people.

It should be noted that this decision wss been taken during the meeting of the National Coordination Committee (NCC) held which was held on the 7th of August at the recommendation of the National Command and Operation Centre (NCOC) with regards to the federal cabinet. After mutual consultation, it was decided to gradually open up recreational activities and their sources in the country. As per the details, it has been found that the tourism activities are set to resume in the country from 8 August onwards while hotels, cafes, restaurants, cinema halls, theaters, parks, trails, and museums shall be reopened for both indoor and outdoor seating from 10th August. Furthermore, all businesses and markets will also be allowed to operate on regular pre-Coronavirus outbreak timings, set to start from 10 August as well.

In addition to things it was also mentioned that all outdoor and indoor non-contact games, gyms, and sports clubs shall be allowed to resume from 10 August. For the ladies of the country, Beauty parlors will also be allowed to reopen from 10 August, that should bring back the life in to the women of our country. People who want to get from place to place by public means shan’t not worry anymore as Public transport is also set to resume form 10 August. However, no passenger will be allowed to travel in the Metro bus beyond the specified seating capacity, hence its going to be a little more difficult, nonetheless, the restart of such platforms is nonetheless a positive sign in the current situation.

Schools, colleges, and universities will also reopen, however unlike other things mentioned before, the date for the restart of schools and universities has been set for 15 September and it is subject to a final review by the Ministry of Education, the ministry shall review the situation and present a final decision by 7th Septemeber as expected, in addition, marriage halls will be allowed to operate from 15 September as well. Meanwhile, the restrictions on trains and airlines are set to be lifted in October, so you will have to wait a little longer for that situation to normalise.

U Microfinance Bank collaborates with NdcTech and Temenos to accelerate digitalization...