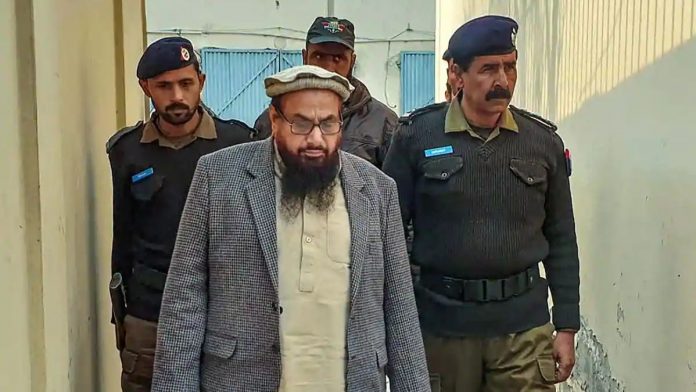 An anti-terrorism court in Lahore sentenced Hafiz Muhammad Saeed, top of the prohibited group Jamaat-ud-Dawa (JuD), to life in jail on Thursday.

Judge Arshad Hussain Bhutta, while administering on case 16/19 and 25/19 recorded by the Counter-Terrorism Department (CTD), passed on sentences against four blamed, including Hafiz Saeed, in two cases.

Charged Zafar Iqbal and Yahya Mujahid were sentenced to 10-and-a-half years each, while Hafiz Abdul Rehman Makki was sentenced to a half year detainment.

The JuD boss has been in the guardianship of the law implementation organization since July 2019; four bodies of evidence have been ruled against him up until now.

The excess cases are forthcoming in the ATC courts.

Prior in February, Hafiz Saeed was sentenced by Judge Arshad Hussain Bhutta to five-and-a-half years in jail in two cases in the wake of seeing him as blameworthy of dread financing and connection with a banned gathering.

The court passed on a jail term of five years and a half year and a fine of Rs15,000 in every one of the case – all things considered 11 years – however that won’t influence the length of the jail term with the two sentences running simultaneously.

On September 17, the Senate was educated by the inside service that the public authority had solidified 964 properties having a place with the JuD and Jaish-e-Mohammad (JeM).

In light of Jamaat-e-Islami Senator Mushtaq Ahmed’s inquiry, the service told the upper place of parliament that 907 of the solidified properties had a place with JuD and 57 to JeM.

In July a year ago, 13 top heads of the restricted association, including its boss Hafiz Saeed and agent Makki, were reserved in almost two dozen instances of dread financing and illegal tax avoidance under the ATA.

The public authority had put the JuD in its rundown of prohibited outfits in February a year ago and chose to dispatch a crackdown on the Jaish-e-Muhammad (JeM), which was restricted in 2002 by then military ruler General Pervez Musharraf.

The choice was made to make a move against the people and associations prohibited by United Nations Security Council. The LeT (Lashkar-e-Taiba) too is among the rundown of prohibited outfits since 2002.

In the essence of PM’s vision of “Kamyab Jawan”, AAA Associates...