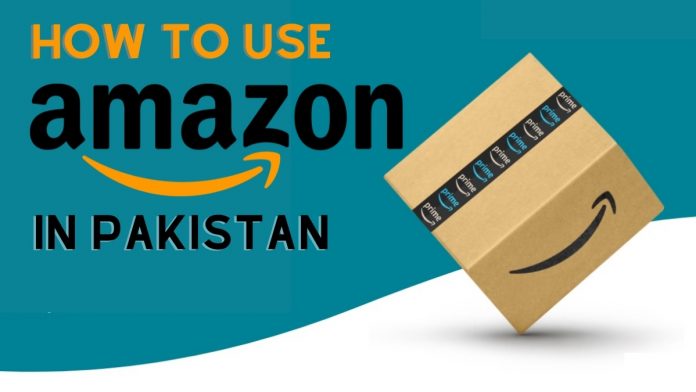 Amazon runs its operations in various countries in the world, and much like PayPal, many Pakistanis for quite some years have been distraught over the lack of its presence within the country.

There’s a lot of questions in Pakistani people that How to use Amazon in Pakistan?, Is Amazon Available in Pakistan? Does Amazon ship to Pakistan? and why amazon is not in Pakistan? so in this article, we will answer all of these questions step by step.

How you can actually use in Pakistan

Many peoples are wondering Is Amazon Available in Pakistan? so they can reap all the benefits which are of course associated with the platform and many have been left wondering as to how you can actually use Amazon in all its glory to make money off of it – of course, it is a very powerful platform to sale out products, perhaps even the biggest and most popular one in the world as we speak.

Unfortunately, there’s a serious lack of information when it comes to the platform, especially amongst Pakistanis, and here, we’ll have a look at all the things that you would need to know as a person residing in the country and looking to dip your pen into Amazon’s ink.

Amazon works by handling the things that you’re looking to sell on its platform – the work which is done by a 3rd party. It connects buyers to sellers via the aid of its platform, and with that said, Amazon actually provides quite a lot of facilities to go along with this.

Indeed when using Amazon, you can either choose to handle shipment yourself, or you can actually end up making use of a service which is termed as “Fulfilled by Amazon” (FBA).

FBA refers to the operation thereby which you can actually hand out what you’re selling to Amazon, and then the sale, delivery to customer, and also any returns or warranty claims, all are actually handled by Amazon itself. Even managing the payment is the responsibility of Amazon.

So all in all, FBA in fact makes the whole process a lot more easier for the seller, with Amazon taking all the responsibilities.

Is Amazon Available in Pakistan?

With Pakistan being added to the official sellers list, it means that being in Pakistan you can actually sell your Pakistani made items to the rest of the world.

This of course presents itself as a huge opportunity for all the entrepreneurs that are within Pakistan as well as the potential entrepreneurs.

The opportunity to gain profits in USD in itself represents a huge plus point. As we all know, the Pakistani Rupee is depreciating against the dollar in a very rapid and quick manner.

This has been the trend ever since Imran Khan’s government took over, and it looks like the trend is going to follow. So more the depreciation of the Rupee, more important becomes the dollar.

The profits gained in dollars can be sizeable, and from a personal standpoint, this can be a huge opportunity for people all across the country to make good earnings via the aid of the platform.

Not only from a personal standpoint, but even from the standpoint of the economy as a whole, this is of course terrific news. Pakistan is in trouble when it comes to the current account deficit that exists.

Now with the country being added to the sellers list, the economy has the potential to boom and is doing so as well since these developments took place. Since the dollar now has more value, people abroad have more buying power so there is quite the potential that sellers can gather around and make use of the platform in order to offer and sell products – products which are cheaper for those abroad.

The customer base of Amazon is also very large, with the customer base being of very high quality as well. Being added to the sellers list also means that people based in Pakistan can actually sell their products at a higher price as compared to what they would seek within the country due to the fact that there is a lack of buying power which exists herein.

Does Amazon ship to Pakistan?

Unfortunately though, while sellers in Pakistan can greatly benefit from the international market if they want to expand their businesses, the possibility of the transaction going the other way around does not exactly exist.

Indeed to put it as simply as possible: Amazon does not ship to Pakistan, and very few products can actually be shipped to Pakistan.

Why not you ask? There are some reasons why amazon is not in pakistan. For one, perhaps the biggest reason which exists is customs. As you may have already experienced personally, getting your products shipped through Pakistani customs is no easy task at all. It can take a lot of time and can take a lot of money as well to do so.

If indeed a package is sent to you from abroad by a friend or relative, the package is likely to be held up, inspected, and is also subjected to import duty as well. All in all, it translates to a rather poor customer experience – one which US stores and brands prefer to avoid altogether.

Does Amazon deliver to Pakistan and if not, why amazon is not in pakistan?

As mentioned above, since Amazon officially does not ship to Pakistan, bar a few products, you cannot actually have stuff delivered within the country.

Indeed perhaps the biggest reason as to why this isn’t exactly possible is complexity. Some products, those of which are electronic in nature, actually require local customizations so as to function in Pakistan or comply with its regulations.

Beyond the product itself, there’s then also the added complexity with respect to the terms and conditions associated with it all. Indeed stuff like international warranty, dealing with returns and also the localization of marketing, packaging materials and after-sale support all end up meaning that the whole process, in all its glory, becomes extremely complex.

Another reason as to why Amazon does not deliver here is the fact that the Pakistani market cannot offer the buying power that economies in other parts of the world can offer.

Indeed being in Pakistan, the income is rather limited and money is definitely a problem. All in all, what this then refers to is a lack of buying power which exists within the country, especially when you consider that the payments would need to be done in dollars, rather then Rupees.

Couple this with the fact that the dollar just seems to be rising more and more in comparison to the Rupee, and we can see why there would be little to no demand for products placed on Amazon for those based in Pakistan. Hence, with that said, it doesn’t come as too big a surprise as to why Amazon doesn’t deliver to Pakistan.

What about Daraz then – perhaps Amazon’s biggest rival in Pakistan

Daraz, in its own right, has long established itself as a rather major part of the country’s economy, and this has been the case for quite the while now. We’ve been seeing Daraz adverts for as long as we can remember, and while Daraz has made its name in the country to quite an extent, it might not necessarily be the right market for you.

There are some problems associated with Daraz as a whole. First and foremost, Amazon is a multi-national company, while Daraz operates within the confines of Pakistan.

Another reason why one should not exactly consider Daraz is due to the fact that the level of customers found of Daraz is no where near the level of those that are found with respect to Amazon.

Most of the customers that are found on Daraz usually give out a one-star review which more often than not is in fact based on a petty issues as well as a grand scheme to return the product which was initially bought – even though the quality might not at all be as bad as stated in the review.

This then has adverse affects all in all on the seller’s profile as well as the seller’s reputation as a whole, and therefore can be very bad for the seller because who likes to buy from a seller that doesn’t have good ratings, right? But with Amazon, the case is different.

More often you’ll find your customers giving honest reviews for the products that they receive and if the quality is in fact good, it would refer to positive publicity for the seller.

And again, another reason why one should prefer Amazon over Daraz is surrounded by the argument of earning currency. While the earning from Daraz would of course be in Rupees due to the fact that it is a Pakistan-based platform, the earnings from Amazon would be in foreign currency.

Indeed when taking upon this sort of perspective, one might even say that there won’t be any negativity or frustration if the Rupee continues to de-value because ultimately, in that case, your earnings would continue to grow and your business would continue to prosper.

All in all, as has been made rather evident, Amazon coming to Pakistan (for the most part), is without doubt great news for all the people across the country.

When the news was actually made official not so long ago, there were people in the country, and officials that were actually congratulating one another courtesy of this particular feat.

Many people failed to realize what the hype was all about and many still fail to realize what all the hype is about. But this is primarily down to the fact that people don’t understand the potential of earnings that you can make with Amazon.

It has been stated that the average person working on Amazon usually makes in and around $1000 per month from sales thanks to Amazon.

While this might not be enough for those living abroad, people in Pakistan can quite easily do quite a lot with such an income.

The top-sellers make around $250,000 from Amazon alone, and while this might be a long-stretch for many, it’s far from being impossible.

We need to recognize the potential that Amazon has brought along with it and the entrepreneurs that lack the knowledge to work on the platform need to be educated over it.

Making a living in Pakistan has become much easier thanks to this platform, and the market is only likely to grow as we progress further and further.

But of course it’s also important to consider the fact that with higher incomes, come bigger responsibilities. If you too are looking to jump on the Amazon bandwagon and are looking to expand your business, make sure the price that you set out justifies the quality of your product.

More often than not sellers based in Pakistan compromise on the quality due to the fact that there is a lack of buying power and people here are always looking for cheaper alternatives, but with a potentially higher income coming in from Amazon, make sure that you’re product is as good as the price you’re demanding!