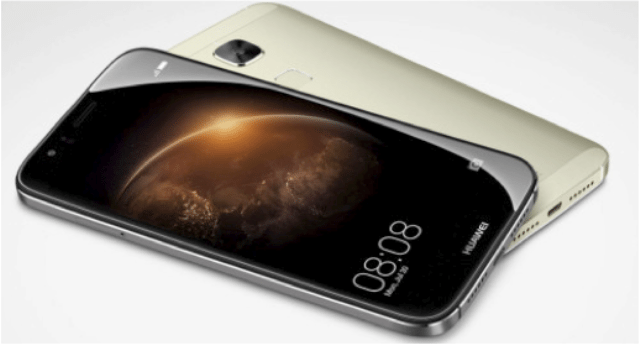 Huawei has established itself as a brand which delivers supreme high-quality technology based products. The extensive research involved in manufacturing Huawei ensures that the final product delivered is beautifully crafted and flawless. This technology giant has long since been delivering extraordinarily brilliant and features rich smart phones such as those belonging to Mate, Honor and P Series. These smart phones have captured the market with a buzz and strengthened the trust of customers in the Huawei brand.

Huawei has now launched a successor of the G7, which, although carrying a similar attractive metal design, it is a lot more enhanced and modernized in terms of its features and specs. Huawei’s latest prodigy G8 is yet another ultra powered smart phone with sleek, eye-catching body and numerous unique and brilliant features.

G8 has been manufactured with a 5.5 inches large FHD screen with 1920*1080 resolutions. Huawei has utilized Gorilla glass in the manufacturing, which would allow perfect hand holding and also effectively reduce the risk of the broken screen. Huawei has applied the Assertive Display technology on the screen of the G8, which would give high-quality viewing experience to the users, even in the bright sunlight, and power consumption of the display screen has also reduced by 50%. The display of G8 has been made a lot more refined by Huawei-even more than super AMOLED display as the color identification range matched the human eye, which would make the photos lifelike and full of vivid colors.

Huawei’s G8 has been superbly crafted and it carries a fine design which makes handling the device easy and comfortable. The perfectly shaped edges of the smart phone allow the users to use the device single-handedly without the fear of it falling down. The back cover of G8 is also very elegantly made, it carries the rear camera with the flash light on the upper part of it and the speakers are at the bottom so that the sounds come from the phone loud and clear. The power on/off and the volume keys are on the right side of the device. The façade of the smart phone is completely touch screen with the soft capacitive keys (Back, Home, Menu), like other Huawei smart phones have, at the bottom of the screen.

Huawei’s G7 and now G8, both the smart phones have been manufactured with superb exteriors. The body of G8, made with integrated Aluminum Metal, the Unibody design and with the view of 360 degrees, is surely going to please the customers.

The operating system loaded on this smart phone is the latest Android 5.1 Lollipop with the Huawei’s super efficient EMUI 3.1 management system. The aforementioned OS has made G8 very comprehensible and manageable. The processor of G8 is updated and the latest. G8 possesses Qualcomm Snapdragon 616, Octa-core 1.5 GHz, and 64-Bit processor, which totally capable of making the performance of this smart phone, fast and seamless. The games would suffer no lag, video/movie buffering would be smooth and speedy and downloads would be done in very short time. This powerful processor is supported by 3GB RAM, 32GB ROM and the memory of this smart phone is extendable up to 64 GB, which is super awesome and perfectly apt to store a large amount of data in it, be it office files, movies or songs etc.

Huawei has made G8 fully rich with numerous cool and amazing features and apps. Along with the exciting built in apps, tons of useful apps can be downloaded in it through the Play Store. Huawei has introduced in G8 some exclusive smart features such as fingerprint identification, which is undoubtedly an amazing feature to keep your device and loads of other important data such as your bank account details etc. perfectly secured. The fingerprint identification has also been enhanced in the G8 and it supports conditions such as wet, dry, partially covered or damaged. The user would have access to his device no matter what and at the same time, the device would be safe as well. Other related features are also very amazing such as the user can press only once to unlock his phone, long press to answer the calls, one finger action to check notifications, remove alarm etc. In short, G8 has been made to make the lives of its users full of comfort and smartness.

G8 carries the enhanced version of the Smart Dual Antenna in it, which would ensure unbreakable connectivity through calls or messages at all times irrespective of the conditions. The MIC of this smart phone has been made more sensitive and it superbly supports the hand-free mode.

To add to the never ending list of G8’s extra cool features the independent one-box sound chamber is another exclusive characteristic of it which is surely going to make G8 high in demand among the music lovers.

In today’s time, it can be rightly said that a large proportion of customers buy a cell phone because of its camera features. Huawei has made G8 super equipped in regards to camera pixels and features adherent to it.

The primary camera of G8 is of 13MP and the front of 5MP, both these cameras carry such tempting features that they would make the users addict to photography using their G8 smart phone. The camera of G8 offers the feature of Optical Image Stabilization; this characteristic allows the users to take perfectly vivid and clear pictures with no blur at all. With F 2.0 aperture, aspherical lens, RGBW sensors and Dual-tone color flash, pictures with G8 would be captured instantly and not a single moment would be missed.  The Dual-Tone flash improves the quality of close-up images, enables capturing of pictures in low light with more accurate white balance.

The front camera of G8 has F 2.4 large aperture and 4 aspherical lenses with exciting features such as Vogue makeup, beauty 3.0 and DIY filters, With these features the users can make his/her selfies breathtakingly beautiful and attractive.

Huawei G8 has been fully loaded with immense energy through the heavy battery which is 3000 mph. With this super loaded battery supported by smart power consumption control technology of Huawei, G8 would be in a smooth functional state for long hours. With the normal usage of this smart phone, the battery will last for 2 days. This smart phone can be used for straight 6 hours with the constant photo capturing, 8 hours with online video viewing, 31 hours on voice calls and 9 smooth hours with constant internet browsing. Now, this is what can be called a Hulk powered battery life.

As a final verdict, Huawei G8 is totally suitable for customers belonging to all walks of life. The features offered by this smart phone, cater to the requirements of all the users. The fast, processor, efficient OS, superb camera quality and heavy powered battery and sleek and smooth design make Huawei G8 an irresistible smart product.

The Super-Stylish Vivo S1 is Now Official in Pakistan

Nikon D3400 Is a Different DSLR