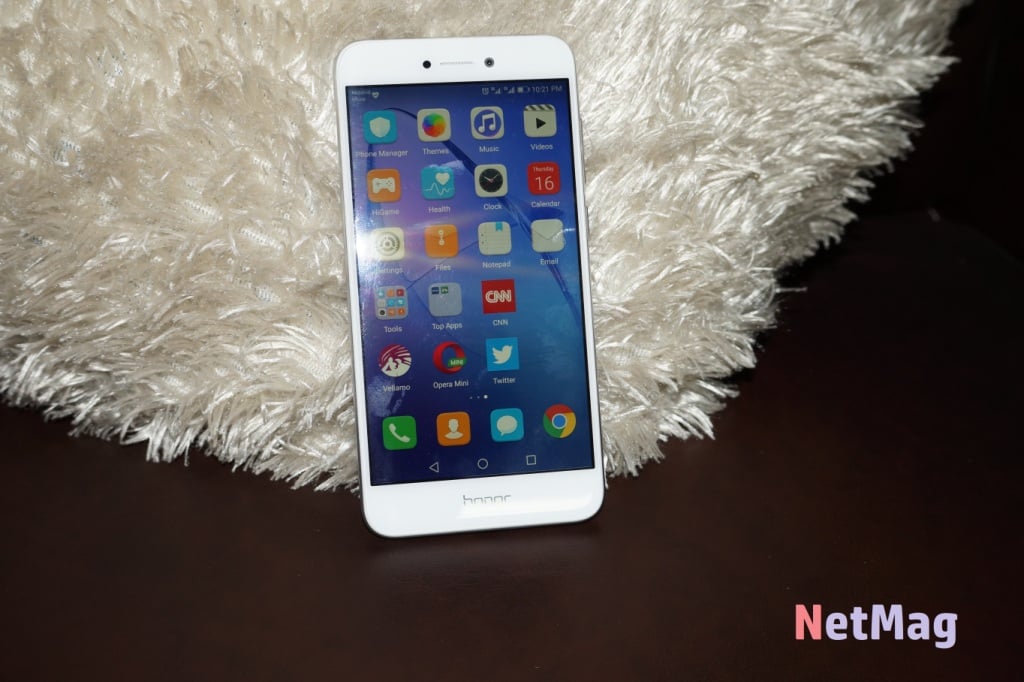 Huawei has been doing tremendously well in hitting Pakistani Market with its Mid-Range and Budget friendly phones. The NetMag team is here once again to review another smartphone of Huawei from Honor series. It’s Huawei Honor 8 Lite, a variant of Honor 8 specifically designed for Asia-Pacific region. NetMag dependably gives reasonable surveys of Smartphones propelled in Pakistan.

Honor 8, especially, was lauded for its beautiful design which left onlookers stunned for a couple of moments. With Huawei Honor 8 lite, Huawei is bringing some design elements of Honor 8 to a lower price point. The most stunning thing about this phone is that its mid-range phone and has specs of high spending phones.

Huawei and some other Chinese companies are known for providing a great number of accessories and add-ons in the box. This is also true for Honor 8 lite. The box comes with further two boxes with battery adapter, data cable, black hands-free, quick start guide and a back cover for protection.

Here’s a breakdown of what Huawei Honor 8 Lite ships along with the phone. The device itself has a 5V/1A charger (no fast charging, unfortunately), a 3.5 mm handsfree with an inline call button, standard USB-A to microUSB cable, plastic back cover, SIM card eject tool, Warranty and product guides.

The white colored metallic body and glass back is wonderful to look on. Huawei Honor 8 lite is very similar to Honor 8 in both design and builds quality. It inherits the same glass back of Honor 8 but loses the unique reflection pattern of original device in the process. It still looks pretty damn good and will definitely turn a few heads. It’s quite understandable if you buy this phone solely for its looks. You probably shouldn’t, but it’s understandable nonetheless.

The problem with glass back and the front is that glass is more fragile than plastic or metal. Add to it the absence of Gorilla Glass and it’s an accident waiting to happen. So this raises some concerns about the durability of this phone. There is a high chance of getting scratches all over your new and shiny Honor 8 lite if you are not careful with it. Thankfully, Huawei does provide a back cover in the box to make sure there is that extra bit of protection available.

Button placement is a pretty standard affair on Honor 8 lite. The right side houses the power and volume rockers, while the left side has the SIM1 plus hybrid SIM2/microSD card slot. The speakers and microUSB slot are at the bottom of the device while the top side has the 3.5mm headphone jack. The nano-SIM card slot is on the side with a slot for SD card.

The display area also has nothing for me to complain about. It’s a 1080p panel so sharpness and readability are not an issue. It also gets really bright which helps to view it in outdoor conditions. It gets two big thumbs up from my side.

It comes with fingerprint scanner that adds to this low budget phone, we can also answer calls with this feature. You can slide down notification panel by using fingerprint sensors. You can answer calls. Your disturbing alarms can be handled with that.

The phone also features with sensors of Accelerometer and Compass. Notifications include service lights and Haptic feedback. Other common features are Voice dialing, Voice commands, and Voice recording.

Despite 16 GB of ROM, 3 GB of Ram, HiSilicon Kirin 655 chipsets, and Octa-Core 2100 Mhz processor, I still can’t understand why it hanged. Either it is my bad luck or the phone is faulty. The major issue faced in it was under multi-functionality and loads of several apps running in the background. While aligning performance with connectivity, we also faced high-speed surfing internet and buffering videos issues even on high-speed WLAN and 4G data enabled.

There is a lot which has changed since the EMUI 4. As Huawei Honor 8 Lite provided the option of App drawer moving away from its one home screen to rule all thinking and has finally given users the choice they were looking for. The whole UI is also a little less reminiscent of Apple’s iOS this time and finally seems to be building its own identity. Its Multi-Touch scores up to 10 on Antutu Benchmark.

Things aren’t all so bright and beautiful. At times, the software experience seems rough around the edges. It feels like the first version of new software — a little buggy and a little blunt. A couple of crashes and some slowdowns here and there take a lot of points away when considering its user experience. It will get better with future updates so it is not that big of an issue, but it is definitely something to keep in mind while deciding about purchasing this phone. The data can be backed up in Hi-Cloud by just enabling it.

It’s brilliant back camera is 12 MP which gives brilliant results. Huawei has been working on selfies and its 8 MP front camera gives clear and sharp selfies.

Different camera modes seem to be an attraction for consumers. Earlier Huawei used a dual camera system in both Honor 8 and Honor 6X, and they also offered the same price as Huawei Honor 8 Lite. Although those cameras didn’t work perfectly one hundred percent of the time, I did like the unique bokeh effect they produced. This single sensor 12 MP camera isn’t bad, but it does falter a bit in comparison to the same devices of Huawei’s Honor Series. Keeping that aside, it does take pictures with good color composition and lots of details in nicely lit areas. Shutter speed is also pretty impressive and you can take a lot of pictures at once with minimal to no waiting time.

The front camera is an 8MP wide angle camera and works perfectly well for a casual selfie or a group picture. The majority of the users should have no complaint whatsoever about Honor 8 lite’s camera. Here are some camera samples for you to see and decide for yourself.

This phone is fueled by a 3000mAh nonremovable battery. With its 3000 mAh battery and a reasonable 1080p screen, the battery life is pretty good too. It will easily last a day and a half on moderate usage. The screen on time is within the range of 6-8 hours consistently.

We found this obvious to mention that this phone Huawei Honor 8 Lite is really a lightweight champion but simultaneously question arises that whether it lasts for long. This phone has updated specs and features, we the issue we have witnessed is compatibility to bear such burden. While ignoring the hanging, rear camera result, low internal memory and connectivity issues we can conclude that buying this phone in 24,900 rupees will not be a bad choice at all.