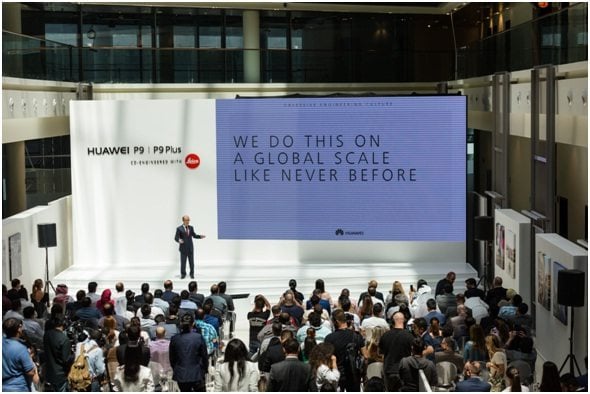 After the successful launch in London a few weeks ago, now Huawei launched its all new flagship smartphone, Huawei P9, at an overwhelming event, held last night in Dubai. The glamorous event was attended by heartthrob celebrities, famous media personalities, glittering fashion icons, and technology world stockholders. In the previous launching ceremony of Huawei P9 in London a few Pakistani celebrities joined Mr. Fraz Malik Khan, Marketing head for Huawei. And the same was the case for the ceremony at Dubai, where a number of renowned personalities from media and technology world witnessed the Huawei P9 launch last night.

Mr. Aamir Atta of ProPakistani, a renowned Technology blogger, was the part of the media convoy joined the Huawei P9 launch event in Dubai. However, among the others were Muddasir Jahangir –Editor of More Magazine, Muhammed Ahmed Siddiqui from E Buzz,
Bilal Mehmood of daily Nawa I Waqat and Mr. Tausif from Daily Dunya. Huawei has a tradition to keep the media engage from different regions and countries across the world, giving them utmost importance while ensuring their presence at the prestigious events like the launching ceremonies of its high technology smart phones.

The P9 launching ceremony was also honored with the presence of IT business icons and stakeholders. But most importantly GM for Huawei Device in Pakistan –Mr. Shawn beside Marketing Head of Huawei devices and terminal department, Pakistan & Afghanistan –Mr. Fraz Khan Malik was at the event to compliment the ceremony.

The event was further progressed with a product presentation, highlighting the spectacular achievements of Huawei in the smartphone technology and the way Mate 8 has set new levels of technology perceptions in the market. The main highlights of the presentation were the “Dual Camera” that is co-created in collaboration with a famous brand Leica, High-end Technology and the best smartphone features of Huawei P9. The modern technological wonder has glorified the tech world and opened new dimensions.

Huawei has a dual camera at the rear side powered with 12 MP, f/2.2, 27 mm, Leica optics, phase detection autofocus, dual-LED (dual tone) flashlights. This is the real-time professional camera, in fact. One camera out of these two does the traditional camera stuff like taking color pictures as it has RBG sensor. Meanwhile, the other one is a monochromatic camera and it is there for taking pictures in black & white and combined together, they’re obtaining a better contrast.

Interesting to note is the fact that the monochromatic cameras are highly accurate while capturing the details of a picture or object and that is why Huawei chose to build a dual camera with this amazing combination making professional photography a real deal. Huawei P9 cannot be a smartphone, but it’s a dual product. It is a smartphone with unmatched and superior quality features, and simultaneously Huawei P9 is a complete professional camera.

Besides the dual camera feature and a dual flashlight, Huawei P9 has a fingerprint scanner just below the camera. The fingerprint scanner has been improved Huawei with respect to efficiency and accuracy. Just like the best fingerprint security experience provided in recently introduced Huawei Mate 8 and Honor 5X, it is strongly expected that the technology master will go on with the tradition to offer the best quality feature. And the P9 fingerprint scanner will be even ameliorated.

Huawei P9 also indicates something below the flash, but this has not yet been described and the Huawei brand followers will soon know all the specifications after getting their most awaited smartphone after the Dubai P9 launching ceremony.

It is pertinent to note that Huawei P9 so far has been reported to come with almost four different versions and that raised the excitement and the curiosity among the Pakistani brand lovers of Huawei regarding the expected launch event here in Pakistan as well.

Ulema Also Come Out in Support of Construction Of Temple

Muahmmad Mustafa - July 13, 2020
0
The Pakistan Ulema Council (PUC) has stretched out help to the development of a sanctuary in Islamabad and scrutinized the individuals who...

Muahmmad Mustafa - July 13, 2020
0
To the pleasure of fans, cricket has at long last come back with England taking on the West Indies in the...
- Advertisement -

Samsung Galaxy S9 set to launch at MWC in February

This Laptop sleeve can charge both your laptop and your phone