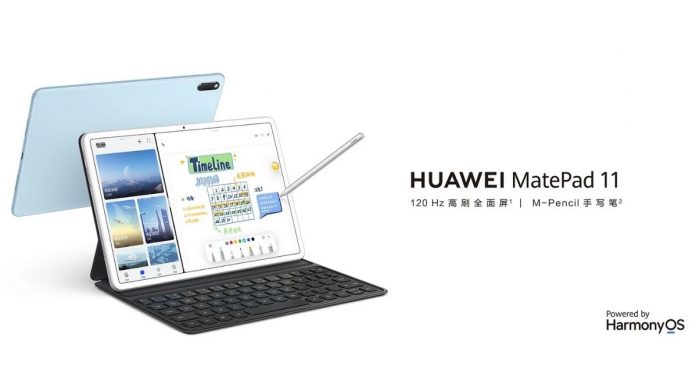 The Matepad 11 was briefly mentioned at Huawei’s launch event held last month and now it is official. The device which happens to run HarmonyOS 2 was actually unveiled in China and much like the Matepad Pro 10.8, it too makes way with a Snapdragon processor.

Huawei has indeed equipped the tablet with a 10.95 inch LCD display that features with a 2560 x 1600 resolution and comes with a 120Hz refresh rate. The display has moderately sized bezels of equal thickness on all the sides while the front facing 8MP camera is positioned on one of the bezels.

There also is a Snapdragon 865 processor powering the tablet and this is equipped with eight gigs of RAM. The storage options with respect to the tablet include in 64GB, 128GB, or 256GB variants. There also happens to be a microSD card slot that allows users to add up an extra 1TB of storage. It does actually come as a surprise that Huawei has added the support for a microSD card instead of the company’s proprietary nano memory card.

The Matepad 11 comes with a 13MP rear camera with an f/1.8 aperture. There also is an LED flash and the camera can actually shoot time-lapse photos. There happen to be four microphones on the device as well as four Harman Kardon-tuned speakers. Hence not only do you get an amazing experience when watching a movie, but also noise cancelling microphones which will of course also eliminate background noise such as the sound of you typing, mouse clicks or even someone walking during a call.

The tablet works with the M-pencil 2nd Generation and also has an optical magnetic keyboard which allows you to use it as a small notebook computer. Users will be able to actually use two instances of the very same app side-by-side. The Matepad 11 can also in fact connect to a compatible computer and hence serve as a digital drawing tablet.