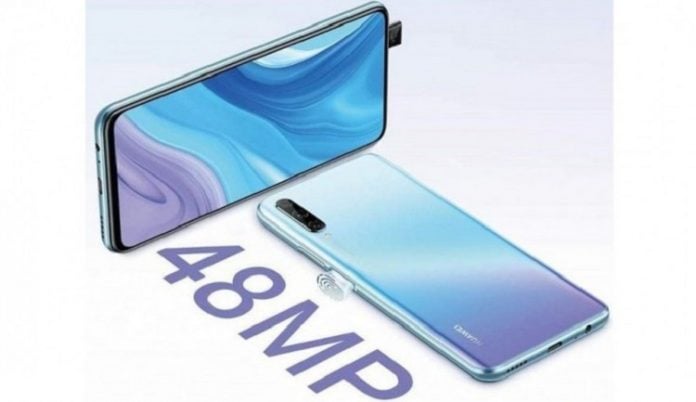 Last year’s October saw the launch of Huawei Y9s smartphone. The Huawei Y9 Prime (2019) soon followed as an updated version of the device that was launched last year. The Y9 Prime (2019) made its debut a few months ago back in May. Now though, a very reliable tipster has proceeded on to share a poster of the Huawei Y9s smartphone. The poster went on to reveal some of the key specs that the phone will bring with it.

In particular, the poster mentioned that the upcoming smartphone from Huawei will consist of a 6.59-inch Ultra FullView notch-less display. It will possess a 48MP triple AI camera on the rear. It will be arriving with six gigs of RAM along with internal storage of 128GB. It will also come with a side-mounted fingerprint scanner.

To put it simply enough, the upcoming Y9s appears to be a rebranded version of the Honor 9X more than anything. As for now though, while there are rumors over the availability of the device, there isn’t any official confirmation. It is probable though that the phone will go official in this month. Not only this, but is expected that the Pakistani market too will be on the receiving end of the device very soon, with it rumored to bring along a price tag of PKR 34,999 in the country.

Must Read: Man murders father and son as they stole Wi-Fi password

The specs (based on rumors entirely)

When you take into consideration the fact that the Huawei Y9s will come forward as a rebadged edition of the Honor 9X, it is quite likely that it will carry support for 1080 x 2340 pixels full HD+ resolution and in all likelihood, it could indeed be powered by the Kirin 710F processor. It is also expected that the EMU 9.1 – that happens to be based on Android 9 Pie will be coming as a preloaded feature on the device.

As far as the camera setup is concerned : it is likely that the 48MP main camera in the triple camera setup on the rear will be assisted by an 8MP ultrawide lens and a 2MP depth sensor. As far as the selfie camera is concerned – rumors say that the phone may feature with a 16MP pop-up camera. The phone could be packed with a 4000mAh battery along with the support for 10W fast charging.

OPPO Find X Exploration at the Edge of SmartphonePossibilities

Apple has unveiled its latest Red iPhone in China