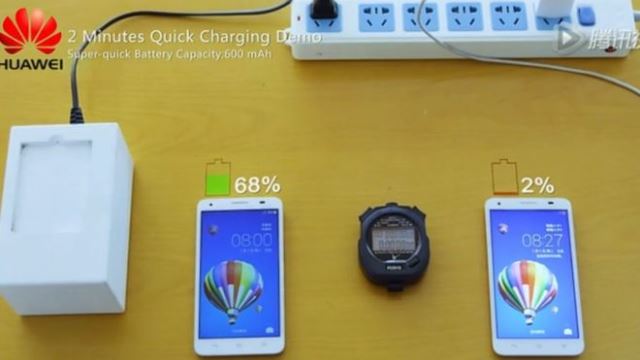 Fast Charging batteries have been unveiled during an event in Japan, last week at the 56th Battery Symposium in Nagoya. Huawei showed its fast charging power-packs through videos at the Symposium. Two batteries, one of 600 mAh power and another of 3000 mAh power were demonstrated in the videos. The former one charged up to 68% in two minutes and the latter one can be charged up to 48% in five minutes. Upon said charging power, these batteries would offer 10 hours of calls on Huawei phones.

It has not yet been announced by Huawei that when they would actually launch these super charging batteries, but yes, they do say that these lithium-ion batteries would charge ten times more speedily than the regular ones. They can reach up to 50% with merely 5 minutes plug in time.

These batteries have been built in Watt lab, which is a part of Huawei’s Central Research Institute in China. They do not cause any decrease in long-term battery life or energy density because of the increased charging rate.

The officials at Huawei have said that “Huawei is confident that this breakthrough in quick charging batteries would lead to a revolution in electronic devices, especially with regard to mobile phones, electric vehicles, mobile power supplies and wearable devices. Soon, we will all be able to charge our batteries to full power in the time it takes to grab a coffee!”

It has not yet been revealed by Huawei that how soon, these batteries will make their way in the market. But it has been pointed out by tech critics that it might be a while before these batteries are put to commercial use because of the bulky accessories, shown by Huawei in the videos, required to charge the removable battery. Still, no matter when it comes out, this definitely is a groundbreaking step by Huawei, which will completely revolutionize the future technology scenarios.