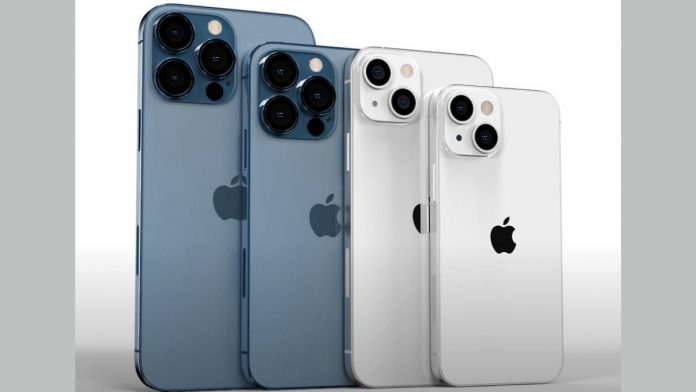 In terms of design, not a lot has changed. This is something that one would expect from the US giants. They don’t change the design of the smartphone much. You get to see the same flat edges, metallic sides, and rounded edges. However, the most significant upgrade in the smartphone was the fact that the notch is now 20% smaller than its predecessor. There are also a few hardware upgrades made to the smartphone which we shall talk about as we move further.

Talking about the design, the iPhone 13 Mini comes with a 5.4-inch Super Retina XDR display. Conversely, the iPhone 13 which is the base model, comes with a 6.1-inch display with the same Super Retina XDR display. Both display panels are OLED panels and Apple claims that they are at least 28% brighter than before.  The higher refresh rate for displays is only available in the premium models sadly. There is also a ceramic shield coating on the screen which adds an extra layer of protection and durability to the smartphone.

In terms of the hardware, both the 13 and the 13 Mini are powered by Apple’s A15 Bionic chipset. This is one of the more significant upgrades made to the hardware. Apple has claimed that the A15 Bionic is currently the most powerful processor in the world. This can be true, given that it has outperformed many in Geekbench tests. Apple’s A15 Bionic is a 5nm processor that comes loaded with some awesome high-level CPU cores along with 4 additional efficiency cores that give the iPhone amazing power. Conversely, the custom GPU in the new devices is also claimed to be 30% faster than the competition.

As far as the memory is concerned, the iPhone 13 and 13 Mini both come with 128GB base storage. However, you can choose a different variant as well with a 256GB or 512GB option available. Thus far there is still no word on the RAM

In the camera department, the iPhone 13 and 13 Mini both have two cameras at the back, and both support a resolution of 12MP. Interestingly, the primary 12MP sensor is the same one that is also being used on the iPhone 12 Pro Max. So, you get the amazing sensor-shift stabilization mode and other awesome features that you would get in a premium iPhone. The secondary sensor is a 12MP ultrawide one which is also very capable. However, you do not get the same auto-focus features as you would on the Pro models.

On the front, there is of course a singular 12MP sensor for all your selfies needs. Additionally, the new 12MP selfie camera has support for the awesome Center Stage feature. This feature allows more people to come into the frame.

Both the iPhone 13 and 13 Mini come with larger battery packs.  However, Apple hasn’t given us a word on the battery capacity yet.  However, Apple says that the new iPhones will give at least 2.5 hours of battery life to the user when compared to the previous iPhone 12. The iPhone 13 Mini has been made available for $699 while the iPhone 13 will set you back by $799.

Apple Patents a foldable phone with self healing mechanism