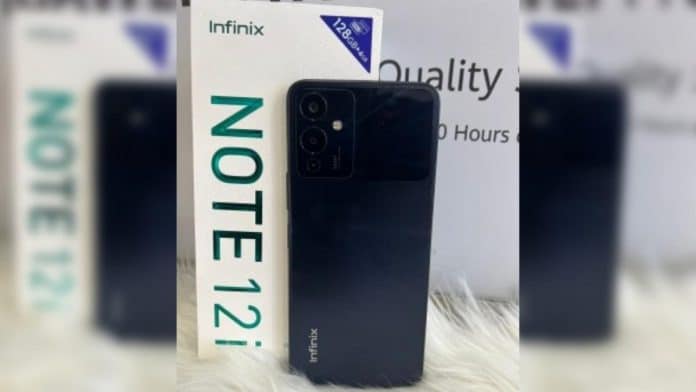 An updated Infinix model has been launched in Kenya it is The Infinix Note 12i. It’s a cheaper replacement to Note 12 and a follow-up to the Note 11i (though not an upgrade in the strict sense).

The phone is equipped with an IPS 90Hz display and although it’s big at 6.82″ however, it’s lower than 6.95″ 11.i display. The higher refresh rate is a result of the improvement, however the downside of this will be that its resolution was reduced to FHD+, which is now 1,640 x 720 pixels.

The Note 12i sports an upgraded camera that features an f/1.6 sensor and 50MP resolution. high-quality f/1.6 aperture (replacing the 48MP f/1.8 camera on the 11i) which is in line with that of the Note 12 camera setup. The camera also comes with two MP of an additional camera as well as another QVGA model (function not known).

Video recording is at 1440p and 30 frames per second just like the previous model. On the front , there’s an 8MP selfie camera that’s a decrease to the cameras with 16MP that came on the vanilla 12 and 11i.

The phone has an 5,000mAh battery that allows fast charging of 18W. The charger comes in the box with an USB A-toC cable, a headset (to connect to the 3.5mm connector) along with a case. A final note on audio, the speakers are stereo included that come with DTS audio capabilities.