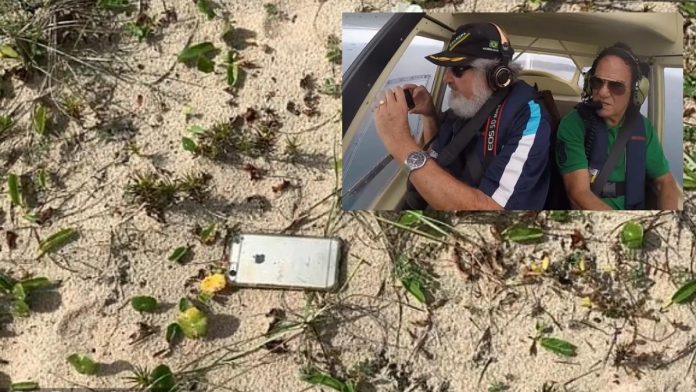 The iconic iPhone models from tech giant Apple have over the course of the past few years have indeed gained quite the reputation when it comes to their sleekness, as well as their ruggedness and versatility – all of the factors which have of course been rather well documented in the more recent years. The feats that have been accomplished by the iPhones range from the likes of surviving underwater for long periods of time, to the likes of long periods of exploration of the Magsafe and the stories just continue to build up. One particular aspect where the iPhone has continued to gain its reputation is with regards to the strength of the display. Indeed stories have flown in of how the iPhones have survived even after falling from an aircraft flying at high altitudes.

And in this particular vein, another story has now emerged with respect to how the iPhone ended up surviving falling from an aircraft during the course of a takeoff while going at 50-60 miles. This particular incident ended up taking place at the Orlando Executive Airport in the US and involved the pilot of a Seminole aircraft – which of course explains as to why the windows might have been open.

Also Read: Is this the closest we’ve come to commercializing air taxis?

While details of how the pilot managed to drop the phone are not known as of now, but immediately after the device fell off, he ended up alerting the air traffic control who then immediately relayed it to the Air traffic control tower. After the green light was given in terms of for the search of the iPhone to begin, it was found without any damage and still worked just fine.

While there happen to be many similar stories coming to mind, in most cases, a large amount of iPhones falling from just a few feet do not survive, let alone from an aircraft, so such stories are indeed bizarre in nature. But nonetheless, it definitely refers to the fact that there is likely a mixture of luck and an even higher element of solid engineering from the team down at Apple.

OnePlus 5 – not really the best of designs

The Mate X is still not fully optimized – will release...