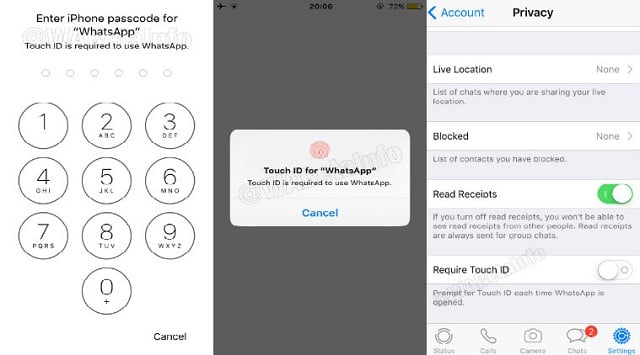 So WhatsApp have created a new feature which will allow the user to lock and unlock the WhatsApp application using Face ID or Touch ID.The new feature lets the user add another layer of protection to the said messaging app via your iPhone’s biometric security which in itself is adds anotherlayer of protection for you’re the app. Depending on which iPhone you’re using, you can either choose to lock WhatsApp and its contents using any of the two applications, either FaceID or TouchID which means that even if your phone is unlocked, you’ll still have to unlock the app once again using either of the sign-in methods that you may or may not have chosen.

Furthermore, this new log-in method was added to WhatsApp’s most recent update, version 2.19.20. So if you haven’t received the new additional optionas yet, you can manually update the app by downloadingthe update from theApp Store that is if it hasn’t done so itself. You can set it up by visiting the Privacy options within WhatsApp’s Account Settings.

Must Read: Vivo V15 Pro is rumored to come with a Snapdragon 675 chipset

Moreover, all good things bring with them some minor technicalities, one such technicality that you should be vary of is that however even if you secure the app with TouchID or FaceID, some of the contents are still viewable from the notification section of your device, specifically the notification bar. Now whenever a new message comes your way, you will still be able to view that message in the notifications, and even reply to it if you want to, without having the need to sign-in using an ID. Now you can simply stop this from happening by disabling the WhatsApp’s notifications on your device, and there, we have your solution.

Regular calls and video calls can also be received without logging inso you’ll have to watch out for thataswell For now, the feature has only been made available for iOS users, however, reports say that fingerprint and face unlock option will also make its way to WhatsApp’s Android play store very soon and android users may well get a nice feel for this new feature.