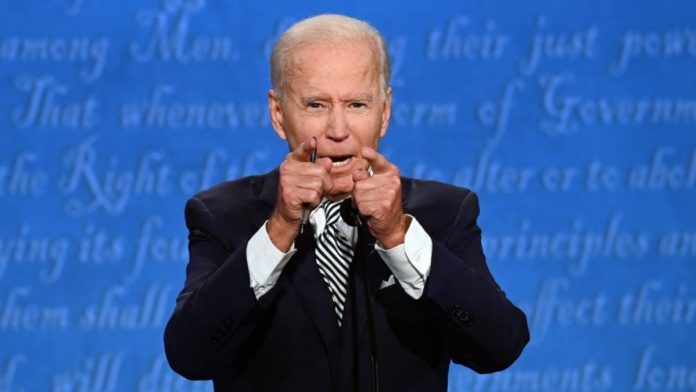 Equitable Presidential applicant and previous US VP Joe Biden utilized an expression during Tuesday night’s turbulent first presidential discussion that is very natural to speakers of the Arabic language and Muslim family units yet could barely be relied upon to be heard in a broadly broadcast American discussion: Inshallah.

Joe Biden utilized the word — signifying ‘God willing’ in Arabic and Farsi — as Republican President Donald Trump supported on saying when he would deliver his expense forms.

“A great many dollars and you’ll get the opportunity to see it,” Trump said of the sum he professes to have paid, as indicated by The Washington Post.

“At the point when?” the Democratic presidential applicant added. “Inshallah?”

The utilization of one of the most universal expressions in Arabic by error inclined Biden, 77, a Roman Catholic, caused a commotion in the Mideast and traveler networks, with many discussing the relevant importance of the expression.

Must Read : Saudi Arab Not Planning On Resuming Tourist Visas Until 2021

Al-Arabiya, a Saudi-possessed satellite station situated in Dubai, and The National, a state-connected paper in Abu Dhabi, both distributed articles taking note of Biden’s utilization of the word.

Others addressed whether Joe Biden had utilized the word by any stretch of the imagination. The previous VP has fought a stammer and is known for now and again stumbling over his words, endless watchers were left contemplating whether he had really said “under the law?” or “In July?” or even “Enchilada?”

Notwithstanding, the Democratic chosen one’s mission affirmed to NPR that he had, truth be told, utilized the expression.

Other than its strict importance of God willing, Insha Allah can likewise be utilized in an approach to recommend something won’t actually occur. Author Wajahat Ali considered this translation of the word the “Arabic variant of ‘fuggedaboudit (disregard it)’.”

China Finding it Difficult to Get Countries to Buy Their Sub-par...

Kate Middleton thanks fans for wishing her well on her 39th...