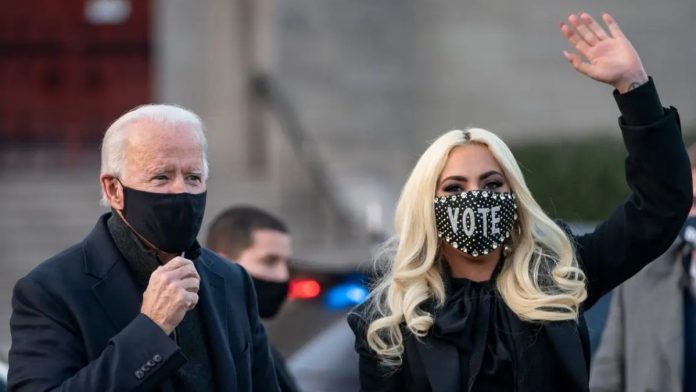 One of the biggest stars of the modern day American music and a powerhouse on whatever stage she gets on, Lady Gaga has in turn come out to her peers by showing support for the Democratic presidential nominee Joe Biden. The star has been supporting the Democratic party leader for some time now and has expressed her loyalty with the former Vice President of the United States of America.

Lady Gaga may well and truly support the potential, next president of the US, however, not everyone related to her in her immediate family are following the same political path. The Singing sensations  father Joe Germanotta has expressed his support for the opposite end of this year’s election, by siding with Donald Trump in the US election, despite the president making derogatory comments about his daughter which is pretty shocking in all honesty, as one would draw a line when considering the comments that the current president made towards one of the biggest stars of the US music industry.

Must Read : Can Biden Still Win? Can Trump Still Win? Yes. Here Are the Remaining Paths

In turn, Germanotta turned to his social media with a tweet in which he endorsed the Republican president as he simply wrote: “@realDonaldTrump 2020.” He further added that “You may have noticed my political and spiritual beliefs are different. liberty and freedom of choice would not be political,”.

It should be noted that on Monday, Trump had fired shots at Gaga as he said during his Avoca, Pennsylvania rally: “Now he’s got Lady Gaga. Lady Gaga, is not too good. I could tell you plenty of stories. I could tell you stories about Lady Gaga. I know a lot of stories about Lady Gaga.” It is worth mentioning here that Lady Gaga had recently joined Biden and his running mate Kamala Harris during their campaign rally at  Pittsburgh where she gave an impassioned speech in favor of the former vice president. Seeing such opposite views between the father and the daughter is particularly rare in this world, but as we can see, it does happen. Let’s see how the 2020 election plays out.

Peshawar Zalmi looking towards Rihanna for the PSL 2021 Anthem