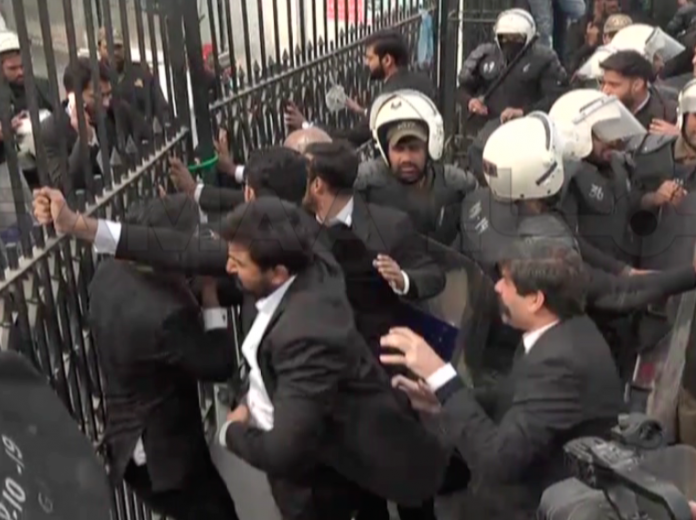 The government now lodged two FIR’s under Anti-Terrorism Act against 250 lawyers in which 15 were named. Also 46 lawyers sent to jail on judicial remand. On Wednesday Lahore saw one of the most unprecedented events in its history when a mob of almost 600 to 700 lawyers stormed towards Pakistan Institute of Cardiology (PIC). As a result 5 to 6 patients died due to damage to the equipment and unavailability of doctors. On their way, they made videos talking about ‘revenge’ from doctors – who attacked lawyers –  of PIC.

One particular video that made the community angry was released earlier on social media. The whole saga started when a lawyer with his mother – the patient – protested the long queues in PIC. The incident escalated quickly. The PIC doctors later beat up the visiting lawyers.

Later on, a doctor’s (Dr. Irfan) video went viral on social media in which he was seen mocking lawyers who had gone to the IGP to book doctors under Anti-Terrorism Act (ATA) 1997 commonly knows as 7 ATA. IGP hesitated to give in to the lawyers demands.

Punjab government then intervened to calm things down. The mocking video angered the lawyers community and they attacked PIC on Wednesday.

The protest went violent and hospital were stormed with lawyers. The glass of the windows were shattered.  PIC is the biggest heart related facility in the province and considered very sensitive.

The mob rained the hospital with stones. The machinery of the hospital worth billions destroyed and patients who were there for treatment inevitably died as a result of the attack.

Minsters were harassed and attacked

Fayaz ul Hassan Chauhan Provincial Information Minister who arrived on the scene to calm the situation down also booked by the mob. He was groped and physically abused by the lawyers.

Punjab Health Minister Dr. Yasmeen Rashid were also present on the scene. She was picketed and harassed by the lawyers.

The whole incident was condemned by every circle and community. PM Khan took notice of the incident.

“Today my head down in shame” said Aitzaz Ahsan while giving an interview to a TV channel.

The government now lodged two FIR’s under Anti-Terrorism Act against lawyers. Rangers has been called to secure the sensitive places of provincial capital.

The protest that turned violent is unprecedented. The law ‘practitioners’ broke all the laws and thrown into the wind. The patients suffered and died as a result. Even in war situations, one is not allowed to attack any hospital or related installation.

The world’s first phone with an in-display fingerprint sensor to be...