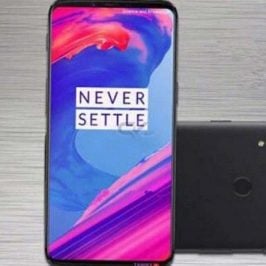 Leaks on Amazon suggest OnePlus 6 to cost 519 Euros. Crystal clear images of the OnePlus 6 have been  revealed by WinFuture, just a few days before the launch of the device. The images are reported to appear on a product listing on Amazon Germany.

With these images, press renders are attempting to reveal the flagship smartphone from every angle possible. Reports say that the link to the product listing was quickly taken down once it went up.

Leaked images are our first official glimpse at the OnePlus 6 and these images do match those revealed by WinFuture and Roland Quandt.

The renders have given us a 360 degree view of the OnePlus 6 with images that are shot from every angle possible. The Amazon listing has also hinted the availability of the device in Mirror Black, and Midnight Black.

The phone has been featured with a glass back and a notch at the top of the almost edge-to-edge display on front.

Lack of bezels is the interesting thing in the phone. It seems that the only bezels OnePlus 6 owners will notice is the one at the bottom chin.

The sides of the phone are made of metal, while the sheet on the front protecting the display appears to be a 2.5D unit with curved edges.

Antenna lines and the new button layout, with power and Alert Slider on the right side with the volume rocker & SIM tray on the left are the specs revealed now.

The smartphone features a centered dual camera setup, dual LED flash, fingerprint reader closer to the center and the OnePlus logo below it with a “Designed by OnePlus” branding at phone’s bottom.

There is a single speaker on the left of the bottom and the USB Type C port in the center along with primary mic and the 3.5 mm jack on the right.

The device was listed on Amazon.de with prices starting from 519 euros.

The device will be globally launched at an event held in London on 16th of May. Later on, OnePlus 6 will be launched in India & China on 17th of May.

Viva Magenta is Pantone’s Color of the Year 2023 for Motorola...