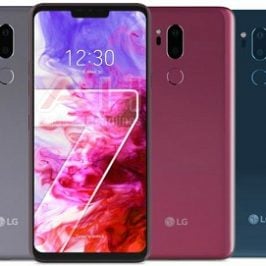 LG unveils G7 and LG G7 ThinQ the latest flagships by LG got finally unveiled to compete with the current flagships including Samsung Galaxy S9 and Huawei P20 Pro series in the market.

Contrary to 5.7″ display of the predecessor LG G6, the company has this time brought its flagships with 6.1 inch bigger M+ LCD that does QuadHD+ resolution of 3120 x 1440 pixels alongside the brightness of up to 1000 nits with another plus point to consume 30% less power than the G6.

This time the company has come up with the taller screen having a 19.5:9 display aspect ratio and with this year’s trending notch. However those who don’t like a notch could hide it under the settings for a more traditional looking display.

LG claims to feature a 50% slimmer chin at the bottom of the LG G7 ThinQ.

Design of LG G7 is assembled with glass & metal. There is also IP68 dust & water resistance, and it is MIL-STD 810G compliant for better durability.

The LG G7 runs on Snapdragon 845 processor and features 4GB of LPDDR4x RAM & 64GB of UFS 2.1 storage. While the LG G7+ ThinQ version offers 6GB of RAM and 128GB expandable via microSD up to 2TB storage.

Must Read: That’s why LG G7 ThinQ will flop

It also gets an AI CAM which recognises your subject with high precision to select the scene while automatically applying adjustments for the perfect shot. The G7 comes with an 8MP f/1.9 wide-angle front camera.

On the left side of the G7, there’s an additional button to be used to trigger Google Assistant. By double pressing this button you will reach Google Lens which provides more info based on what it sees from the cam.

3,000 mAh capacity thar is Chargeable via USB-C is the only point that fails to attract the customers. However, the combination of Snapdragon 845 processor and Android 8.0 Oreo would provide better power efficiency compared to the company’s earlier models.

A Redmi phone with a 64MP sensor in the works?