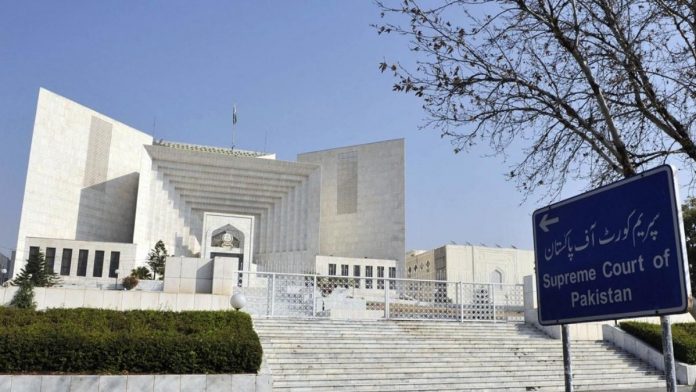 Three-member bench will continue to hear petitions.The counsel for Punjab Assembly Deputy Speaker Dost Mazari, Irfan Qadir, and the counsel for Pakistan Peoples Party (PPP), Farooq H Naek, on Tuesday, abstained from SC proceedings, as the court was resuming hearing applications in relation to the recently concluded elections for the coveted position that is Punjab Chief Minister of Punjab.

The proceedings started at 11:30 am , and a three-member bench led by the Chief Justice, Umar Bandial presided on the hearing.

Punjab Assembly Deputy Speaker Dost Mazari lawyer, Irfan Qadir, came to the rostrum, where he said he was instructed not to be part during the hearing.

“I am not participant in any further legal proceedings”, he said.

Qadir declared that he would submit a revised application against the ruling that rejected the petition to create of a five-member bench to which the chief justice responded to the effect that they had determined not to have a complete court to consider the case.

“Arguments were heard in the court concerning the conformance of the party’s leader’s directives,” the Chief Justice of Pakistan stated, noting that lawyers representing the parties were informed that the Constitution does not permit interference in governance.

Justice Bandial maintained that the demand for the creation of an all-court was just slowing the process and the Apex court judges weren’t ready until the second week of September.

He also said that he’d like to finish the case as soon as possible in order to improve management and resolution of crisis.

“Bringing the matter before the entire bench amounts to forcing the case into unneeded adjournment” the CJ stated, repeating that the case could be delayed until September because the members on the bench were away on vacation.

The counsel for PPP Farooq Naek also appeared on the rostrum, and said that the party will not be appearing in the court.

The chief justice informed Naek that he did very well in his assistance to in the hearing on Monday, and allowed him to take his seat. Justice Bandial added that the PPP did not get to be as a defendant in the case.

The proceedings continued the chief justice declared there was no question of the party’s instructions to parliamentary members in the Article63A case and said that assistance will be required in legal matters.

Awan’s argument on Monday, he said that based on the ruling of the former SC judge Sheikh Azmat Saeed’s bench of eight members the majority of decisions were made by the leader of the party and the CJ said that the verdict of eight judges on Article 63A did not constitute an overwhelming majority.

He claimed that the case where the eight judges made the decision was decided by a bench of 17 and, if the decision was taken by nine judges and only then could it be declared to be a majority.

Justice Bandial questioned if the Supreme Court could be bound by the opinions of just eight of 17 judges. Justice Bandial also instructed the Barrister Ali Zafar to assist the justices on legal issues.

The CJ said that a different option to conduct the hearing is for judges three to segregate with the bench.

He also asked those who are boycotting the court hearing as well as the government in power to show the court some “grace” and to listen to the proceedings of the court.

Pervaiz Elahi’s lawyer said the reasons behind the dismissal of the petitions were formulated in separate by judges. He added that Justice Khawaja was of the belief that Article 63A hinders members from exercising their right to vote freely.
Justice Jawad Khawaja did not give the reasons for his conclusion in the decision, Ali Zafar said.

Elahi’s lawyer claimed that he did not agree with Justice Khawaja’s decision. “What is the Constitution stipulate about who’s instructions to be voted on” Justice Ali Zafar asked the Chief Justice., whom the lawyer responded that in accordance with the Constitution the instructions for voting were issued by the parliamentarians.

“Is the party in parliament separate from the leader of the party?” the CJ asked.

The Chief Justice Bandial further stated that the parliamentary party doesn’t make any decisions independently, and that the decision taken by that political organization is made known by the parliamentarian party on the basis of what it has decided.

Justice Muneeb Akhtar was unsure of who the concept of party leader was, and whether the party’s chief was just the leader of the party.

Justice Ahsan then questioned where the term “parliamentary leader” was applied, and Barrister Ali Zafar said that in 2002 it was mentioned in the Political Parties Act mentioned the parliamentarian party.

The use of the word “parliamentary leader” instead of the party that is parliamentary was a blunder, Justice Ijazul Ahsan maintained.

The 18th Amendment and the 21st Amendment cases, only the clauses in Article 63 were looked at, Justice Ijazul Ahsan said.

“Regarding Article A, the matter of the leader of the party was not scrutinized in depth at the moment” said the official.

A judge who is constantly changing his mind is not an ideal example of consistency, Chief Justice Bandial said. “There must be uniformity of the judge’s views. I will only change my mind when I have a valid reasonto do so,” the CJ declared.

The Additional Attorney General Aamir Rehman was then brought to the rostrum and made “few arguments” to the judge. Justice Akhtar questioned if the federal government had departed from the ruling of the ruling coalition?

“I will be assisting the court as per article 27(A)”, Rehman stated. There should be no error in the judgment of the court the chief justice declared and added that all were welcomed to assist the court.

The counsel of PTI Imtiaz Siddiqui stated that the instructions from the party’s chief must be followed in the coming days. The deputy speaker also stated that he had received Chaudhry Shujaat’s letters.

Chaudhry Shujaat’s lawyer however, stated it was addressed to party members. The chief justice inquired whether it was handed at the meeting of the parliamentary party prior to the vote?

The court adjourned the proceedings until 22:30 pm.

The apex court earlier had dismissedthe Coalition government’s demand for the creation of a full-time court to consider the petition of Elahi against the chief minister’s election in the province.

A three-member bench, led by the Chief Justice of Pakistan Umar Ata Bandial and comprised of Justice Ijazul Ahsan and Justice Munib Akhtar was able to hear the petition submitted by Elahi who is an aspiring candidate for the post of CM in opposition to the decision on the part of Punjab Assembly Deputy Speaker Dost Muhammad Mazari regarding the fate of the PMLQ vote during the Punjab CM’s election.

Mazari in his decision had ruled against 10 votes cast by Pakistan Muslim League Quaid’s (PML-Q) members, relying on the Supreme Court’s ruling that the votes of these lawmakers who defied the instructions of the leadership of the party were not counted.