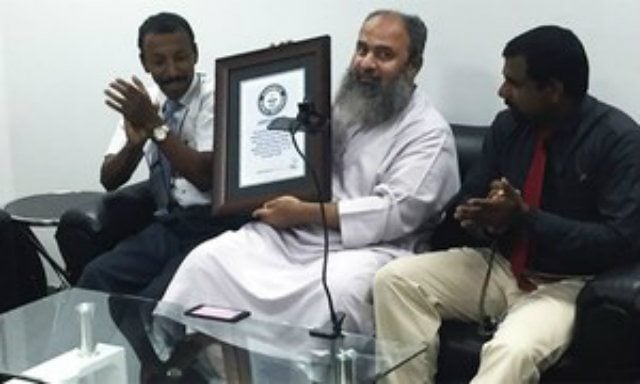 Abdul Basit Siddiqi,  who, first had achieved his world record by identifying all elements in the periodic table in 3 minutes and 9.29 seconds last December, is now being recognized by the Guinness World Records for being the fastest person in typing a message using Swype technology.

Abdul Basit accomplished this feat by typing a two-sentence long text message in  17.5 seconds on 22 May, in  Dubai, United Arab Emirates.

Here is the text message that he had typed using Swype technology (Swype technology allows you to input words on a virtual keyboard on your smartphone by sliding a finger from the first letter of a word to its last letter, lifting only for spaces. This technology also predicts the intended word using error-correction algorithms.)

“The razor-toothed piranhas of the genera Serrasalmus and Pygocentrus are the most ferocious freshwater fish in the world. In reality, they seldom attack a human.”

He typed this message in the presence of Guinness timekeepers and judges.

To achieve this goal, it is reported that Siddiqi attempts an average of 15 minutes per day.

He told after setting the first record,

“In mental calculations, I am not anything like a genius but from my childhood, I was pretty good at it,”

“I touched pretty much every field, science, commerce, arts. But the subjects with numbers, I liked the most.”

It is being reported that the man attempted this record to inspire his students.

Huawei’s Honor 8 proves to be an industry favorite