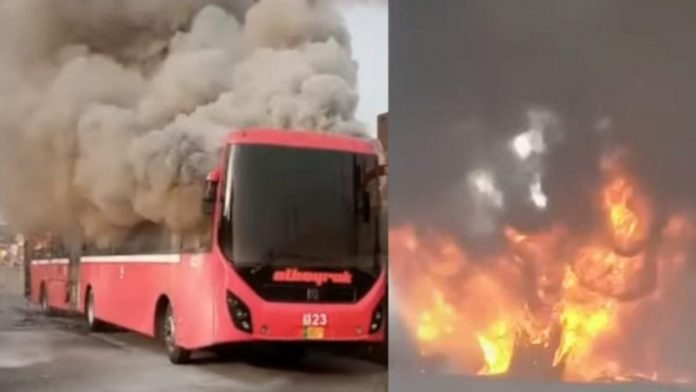 According to the management of the service the fire started in the engine. It then spread to the rest of the bus that the entire bus was set on fire. The passengers were safe, however the bus was burned to the point of burning.

In addition, the administration said they were trying to determine the other reasons that could be the cause of the fire.

A video taken by a passing motorist showed thick smoke coming from the station, which was surrounded by a crowd of people who were watching the scene in awe.

Prior to that, in a similar incident, a Metro bus caught on fire near Jinnah Avenue in Islamabad on Monday.

The passengers were safe without injury because the driver stopped his bus at the right time and opened the doors permitting the passengers to exit the bus. The fire department also arrived at the scene to put out the fire.

Additionally authorities from the Metro Bus Authority says that the situation is under control, and the passengers were safe.

The authority also stated that they’d delivered a report to the Punjab government Punjab asking for funds to fund maintenance work on the metro tracks and buses.