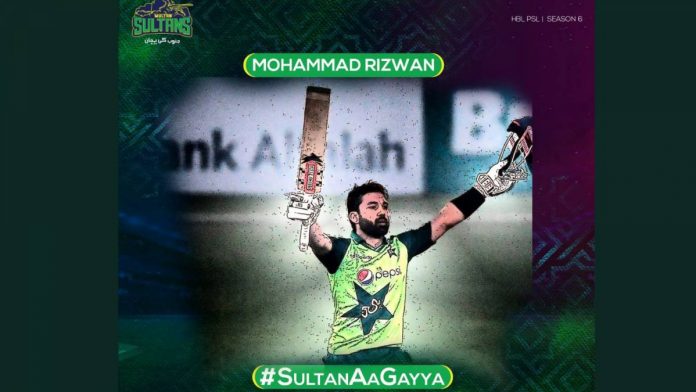 Multan Sultans have gone for a change in strategy we presume as they have announced a new captain for the upcoming Pakistan cricket festival, the PSL 6. The team representing South Punjab, have appointed Pakistan’s Test vice-captain, Mohammad Rizwan, as the new leader of the side, as Multan Sultans look ready to leave their mark in the new season. Sultans have decided to replace Shan Masood as captain of the team and have opted to appoint their new latest draft pick of the season, Rizwan as the captain for PSL 2021.

Rizwan has seen terrific form recently and has performed in all formats for Pakistan cricket team. He scored an excellent match-winning knock against New Zealand in the third and final T20I and continued to show his dedicated performances in the recently concluded T20I series against South Africa, by scoring an amazing century and a half-century in the three-match series, which made him worthy to contend for the leadership role at Multan Sultans.

Must Read: Reaction of Pakistanis to The PSL 6 Anthem

Among other achievements, Rizwan was also a part of the title-winning squad of Karachi Kings in the previous season, but his chances in the playing eleven were limited as Karachi opted to use West Indian cricketer, Chadwick Walton, in his place. Many experts regarded Rizwan’s T20I performances not up to the standard and claimed that he would be better suited for other formats, however, the man behind the stumps took that criticism to the heart and proved his doubters wrong after performing at the highest level in the previous two T20 series, where he let his bat and wicket-keeping gloves do the talking.

Rizwan’s saw an amazing run of form against South Africa which earned him the man of the series award. He also set a record by becoming the highest-scoring Pakistani in a three-match T20I series, scoring 197 runs with an average of 98.00 and a strike rate of 145 which shows his amazing capability. His excellent series with the bat helped him move up by 116 places in the ICC T20I batsmen rankings and he now ranks 42nd in the world and he has no plans of settling there. Captain Rizwan will lead Multan Sultans in this season, as fans will be hoping that Multan Sultans win this year’s championship.