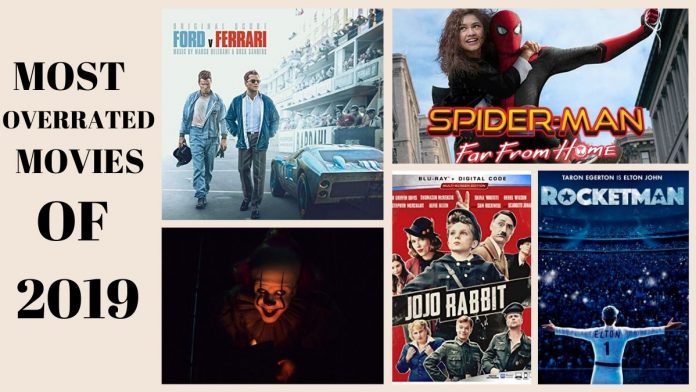 2019 has been a great year for movies with some stellar performances from 1917, Joker and Parasite stealing the show. However, many movies with strong casts failed to deliver to its high standards set, regardless, the movies were well received just because of the cast. This is why we have come up with a list of what we think are the 10 most overrated movies of 2019. One might disagree with the list and that is completely fine:

American automotive designer Carroll Shelby and fearless British race car driver Ken Miles battle corporate interference, the laws of physics and their own personal demons to build a revolutionary vehicle for the Ford Motor Co. Together, they plan to compete against the race cars of Enzo Ferrari at the 24 Hours of Le Mans in France in 1966.

Jojo is a lonely German boy who discovers that his single mother is hiding a Jewish girl in their attic. Aided only by his imaginary friend — Adolf Hitler — Jojo must confront his blind nationalism as World War II continues to rage on.

Defeated by members of the Losers’ Club, the evil clown Pennywise returns 27 years later to terrorize the town of Derry, Maine, once again. Now adults, the childhood friends have long since gone their separate ways. But when people start disappearing, Mike Hanlon calls the others home for one final stand. Damaged by scars from the past, the united Losers must conquer their deepest fears to destroy the shape-shifting Pennywise — now more powerful than ever.

As Spider-Man, a beloved superhero, Peter Parker faces four destructive elemental monsters while on holiday in Europe. Soon, he receives help from Mysterio, a fellow hero with mysterious origins.

After completing his studies, Reginald begins to perform rock music at local pubs. Later, he meets John Reid, a music manager, who helps him rise to fame, but also creates chaos in his life.

What is 3D printing and what’s its future

Prince Harry to marry Meghan Markle on 19 May