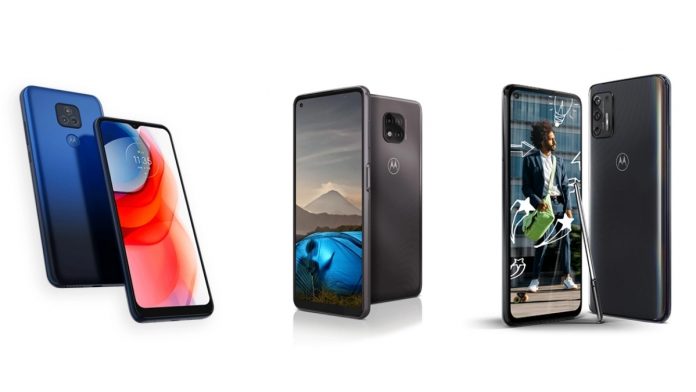 Motorola have arrived in the new year with their latest G series smartphone series which comprises of mid-range phones. The new series comes with three smartphone models, notably : G Stylus, G Power, and G Play. As always, the G Play is the cheapest handset in the series , the G Power has the most battery, and G Stylus, as the name suggests is the phone which will have an additional stylus.

The first and the major phone in the series, The G Stylus comes packed with the biggest screen seen on a G series phone yet, a 6.8-inch LCD with 1080p resolution. It comes with a punch-hole cutout for the selfie camera and the fingerprint sensor is mounted on the side atop the power button. The stylus has a clicky top that can be used to pull it out from the bottom of the phone. In terms of the hardware, the device features the Snapdragon 678 SoC and has only one memory configuration, 4GB/128GB. The battery capacity is 4,000 mAh and it lacks support for fast charging. On the software side, you get Android 10 out of the box on all three phones. The camera setup consists of a 48MP primary sensor, an 8MP ultrawide sensor, and a duo of 2MP cameras for depth and macro photography. Its selfie camera is a 16MP unit with pixel binning support.

The second phone in the series is the Moto G Power which comes with a little smaller 6.6-inch LCD and which drops the resolution to 720p. It also has a cornered punch-hole selfie camera and a side-mounted fingerprint sensor to give you access to the phone. There are three cameras on the back. In regards with the hardware, the phone gains power from the Snapdragon 662 along with  4GB RAM and 64GB storage that can be expanded via a microSD card. Battery capacity is bumped to 5,000 mAh and it also has 15W fast charging support, though the box only includes a 10W charger. The camera setup has the same 48MP main sensor, but the ultrawide lens has been removed while the two 2MP cameras are still there. The selfie camera is an 8MP in this smartphone.

The third and final smartphone in the series, the Moto G Play, is the cheapest out of the three, it boasts a  6.5-inch LCD with 720p resolution and a waterdrop notch for the front camera. It has a fingerprint sensor on the back instead and only two cameras in the primary setup. You get the entry-level Snapdragon 460 chipset with 3GB RAM and 32GB storage and a microSD card slot. It also has a 5,000 mAh battery but lacks support for fast charging, unlike the G Power. It is promised to last up to three days since it is only an entry-level phone. The 13MP main camera is accompanied by a 2MP depth sensor. This camera can record 1080p videos at 60FPS. The front camera is a 5MP shooter.

See how the Huawei Mate 20 Pro looks inside